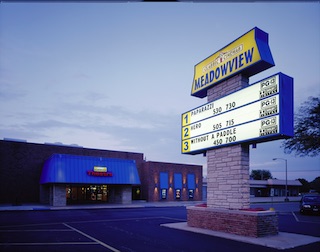 Classic Cinemas is a family-owned business, founded in 1978 and based in Downers Grove, Illinois. Today the Johnson family operates 15 locations and 130 screens. Many of those locations were acquired by Classic Cinemas in a state of disrepair and were meticulously restored to their original splendor while updating to the latest technology. The family belongs to several preservation societies, including the Theatre Historical Society. The company received the Landmark Illinois Richard H. Driehaus Foundation Preservation Award for Stewardship in 2011. Their newest location, the Meadowview in Kankakee, Illinois, is a newly expanded seven screen movie theatre with luxury heated recliner seats, 7.1 surround sound, and 4K digital projection. The Meadowview expansion was supervised by TK Architects International, which is headquartered in Kansas City, Missouri. I recently spoke via email with TKA principal Theresa English about the challenges of renovating an older cinema. Here is our conversation:

Digital Cinema Report: When did this renovation take place? How long did it take?

Theresa English:  The new construction started in March of 2019 but was delayed due to an easement from a neighboring town. Construction finished during the pandemic but due to State requirements, they weren’t able to open until April of 2021.

DCR: Describe the existing facility when you first saw it. 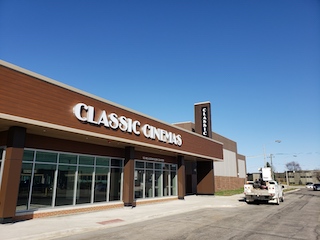 TE:  Heavy stone columns supported a red mansard roof covering the sidewalk in front of warm toned brick building. Then there was a narrow alley and an old, closed oil change building. Inside was a small Lobby/Concession area that served the three existing auditoriums. Two formed from a larger auditorium split in half plus another screen.

DCR: What did the owners want done? What was the goal here?

TE:  Classic Cinemas had purchased the adjacent lots to expand the theatre and increase their screen count to offer additional movies to the community.  With the addition of more screens, they wanted to restore the single auditorium by taking down the [dividing] wall to be a premium large format auditorium and add that amenity to their theatre.

DCR: What, if any, were the constraints?

TE:  The site backed up to an open and operating gas station that needed to be maintained and protected during construction. Also, there was a significant sewer line that cut diagonally through the front of the site.

DCR: What was the biggest challenge that this project presented?

TE:  The biggest challenge was having a new expanded facility completed and ready for guests but not being able to open due to state constraints and compounded by lack of content from the studios.

TE:  We worked closely with Classic Cinemas to design the expansion of the lobby, add a vestibule, and create a more contemporary feel for the expanded theatre. This way their guests would be sheltered by the oversized canopy even before they enter the building.  By eliminating the stone on the canopy columns, we were able to enclose them in the storefront and new space, [and give] the columns a sleeker profile. The expansion created a promenade space and we worked with Classic to design the guest experience and make sure they could find the auditoriums for their movies.  We also added an additional set of restrooms and a unisex restroom as part of the new promenade and worked with Classic to select finishes that complimented their vision for the patron experience. 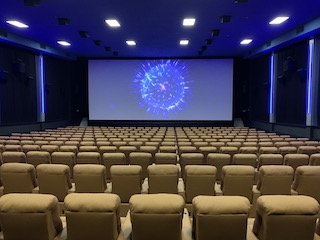 DCR: Once building begins, renovations invariably uncover unexpected things. Hidden walls or pipes that weren’t where they were supposed to be. Damage that was previously unknown. Did you have to deal with anything like that in this project? If so, what was it and how did you resolve the issue?

TE:  The general contractor ran into some plumbing that was combined coming down from the roof that they had to separate and some underground utilities that had to be relocated as they were not where they were expected to be.  We were able to work with them to relocate those connections on our plans. Classic had already replaced the roof top units serving the existing theatres prior to the expansion and reroofed at that time.  Because the unit size changed, we had helped them add a beam underneath to carry that load prior to the renovation work. This probably helped reduce the surprises.

DCR: Were there any changes to the design once building got underway? 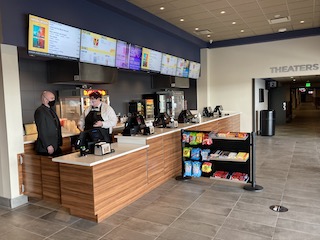 TE:  The expanded storefront encased lobby allows customers to see into the building while they approach from the parking lot. The new canopy is anchored by a tower sign that extends through the canopy to the sidewalk.  Once inside guests are greeted by a new concession stand and a self-serve drink station.  With wayfinding guests are aware that the newly restored large PLF is immediately off the lobby while the existing auditorium and the new ones are down the promenade to the right. Each auditorium has a large monitor telling guests which film is currently showing in that auditorium.  The overall feel is clean lines with a welcoming feel.

DCR: What about this project gives you the most satisfaction?

TE:  Working with a client to bring their initial vision of needing more screens in a smaller community to fruition is very rewarding.  Seeing the facility change from a small functional theatre to a statement piece for Classic is very satisfying.