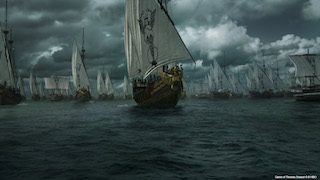 One of the most memorable episodes of season 6 of Game of Thrones was the Battle of the Bastards, in which Meereen is under attack by a huge fleet of ships firing flaming pitch at the city. It was also just a sample of the effects work that Rodeo FX did for the series. The studio created FX simulation of flaming cannonballs, shot from ships in the harbor and ripping holes in buildings while CG smoke and particles fill the air. The Dothraki Horde comes to the rescue, during which there is a CG decapitation. Daenerys climbs on Drogon, flies across the Meereen gates, and gets the dragon to breathe fire to destroy the ships.

Rodeo FX shared many of these shots with Rhythm & Hues, which created the awe-inspiring dragons. In all Rodeo FX completed 65 shots for that episode.

In addition to the fully CG Meereen, the team at Rodeo FX simulated CG sails, water, and fire, while matte painting was used to fill in the details, such as skies, distant mountains, and cliffs.

“Episode nine really is the pinnacle of the season,” said Sébastien Moreau, president of Rodeo FX. “The destruction of the ships was a huge undertaking as we had to model a completely different version of our asset for this scene. The final product is film quality work.”

Rodeo FX produced a total of 152 visual effects shots for eight episodes of season 6 of Game of Thrones, HBO’s epic fantasy drama. The studio’s work included a pivotal battle scene at the gates of Meereen. Over six months, and working on the kind of tight production schedule required for episodic TV, Rodeo FX delivered cinematic quality work, enhancing the magic for audiences around the world. The studio has been nominated for another Emmy Award for its work on Game of Thrones. It previously won Emmys for seasons 4 and 5. 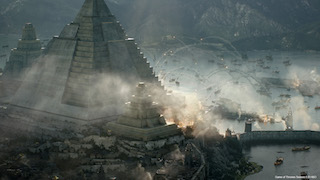 "This is our third season working on Game of Thrones,” said Matthew Rouleau, VFX supervisor at Rodeo FX. “Given the growing scale and scope of the show and the scenes we worked on, the challenges were greater, and more exciting, than anything we have done in the past two years.”

Rodeo FX created a CG Dothraki Horde and horses that were used in two episodes. The army and their steeds were simulated, rendered, and composited with practical crowd, to allow for a vast sea of Dothraki trudging across the plain toward the gates of Meereen.

“The 3D horse and rider assets created by Rodeo FX, along with crowd simulations, laid into the photography so beautifully, and were so indistinguishable from their photographed counterparts, that I was barely reminded that I was reviewing complex visual effects,” said Joe Bauer, production VFX supervisor for Game of Thrones.

Rodeo FX created a 443-frame sequence for episode 7, The Broken Man. The final shot reveals the studio’s Volantis bridge from season 5, a fully CG environment, and was the result of two months of dedicated work shared among 23 artists at the Montreal studio.

“The creation of the city of Volantis lives and dies by the lighting,” Bauer explained. “In season 5 we introduced Volantis in broad daylight, and the asset created by Rodeo FX was utterly convincing, both from a distance and up close, and was ultimately award winning. For season 6 we saw Volantis at dusk, with a subtle and beautifully photographed practical environment the digital assets had to seamlessly integrate with. The ultimate sculpting of light over these CG surfaces not only sold the reality of this artificial place, but also its strange beauty. It's impossible to perceive where the photography ends and the digital begins.”

Adapted from A Song of Ice and Fire, by George R.R. Martin, Game of Thrones is produced by HBO and stars Emilia Clarke, Peter Dinklage, Kit Harington, Lena Headey, and many others, now familiar and beloved by international audiences. Steve Kullback is the VFX producer for the show.