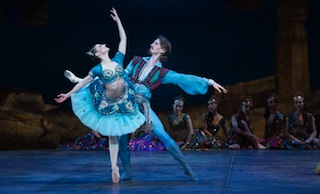 DigitalTheatre.com has expanded its ballet content with Le Corsaire, the first production to be captured live in HD by English National Ballet.

Le Corsaire (The Pirate) is a thrilling ballet about Conrad, a dashing pirate, and his love for Medora, a beautiful harem girl. It is a swashbuckling drama of captive maidens, rich sultans, kidnap and rescue, disguise and conspiracy, love and betrayal, culminating in a shipwreck, which is one of the most breathtaking spectacles in ballet.

English National Ballet is the first UK company to perform the complete work, which showcases some of the most bravura male dancing in the ballet repertoire.

DigitalTheatre.com Collections is a unique cultural service that provides a platform for producers of quality content that has previously been recorded, forming a catalogue of recent and contemporary theatre, concerts, opera, ballet and dance.

The titles are available to watch online, download to your desktop or view through DigitalTheatre.com’s app for Samsung Smart TV.

Robert Delamere, co-founder and creative director of DigitalTheatre.com said, “We are delighted to share English National Ballet’s Le Corsaire on screen with a global audience, as we continue to expand the variety of productions available to watch on DigitalTheatre.com, the world’s best on-demand global arts entertainment platform. Its spectacle and choreographic brilliance are a thrilling addition to the platform, and it is a privilege to work with a company of the stature of English National Ballet and an artist of the calibre of Tamara Rojo.”