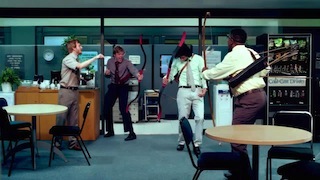 Grant de Sousa directed the commercials for agency FoxP2. Two days of filming took place in Cape Town before Embassy completed editing and post at its studios in Johannesburg. These entertaining commercials contain great special effects, with actors blown out of explosive chairs and shot with arrows. With the director and agency located in Cape Town, and the client and post team in Johannesburg, Embassy used an ingenious combination of Cospective’s Frankie and cineSync to communicate internally and complete the review and approval process with the director and client in a scant two weeks.

After initially embracing these tools to solve geographical constraints, Embassy has come to rely on this remote workflow and has noticed its clients in Johannesburg and Cape Town embracing the convenience more and more, meaning fewer in-studio review sessions.

“Frankie and cineSync sessions are more effective than being in the same room because everybody’s focused on the session,” said Peter van Jaarsveld, managing director at Embassy. “Once a client has done it once, they’re blown away. We do more in a 15-minute session than in an hour in the suite. Everyone’s more focused, everyone’s there to do a job.”

Frankie, the browser-based video review tool, was used to review references for the director’s treatment, do reviews of the extensive in-camera and post tests for the stunts and to edit review sessions before agency and client approvals. It allowed any and all users to make frame-accurate comments, mark up and annotate right on the screen, with all of these notes saved in a handy PDF that was shared with everyone. 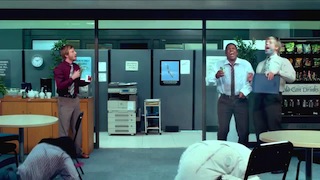 “We used Frankie any time we needed a collaborative review, because there’s no software to install and it’s very user friendly,” van Jaarsveld said. “We sent the URL of our uploaded video to our client and de Sousa, and with one click, they were in.”

Bandwidth can be a problem in South Africa, limiting the size of files that can be quickly shared. For a 30-second commercial, 15-20 Mb files were uploaded once and then viewed in Frankie simultaneously by everyone in the session, no matter where they were. The much larger ProRes files, being viewed on both the vendor and client sides, required cineSync for review of these locally hosted files.

“We used cineSync for live approvals between our suites in Cape Town and Johannesburg because of its ability to display high-res files to HD broadcast monitors via Blackmagic with no latency,” explained van Jaarsveld. “This allowed the client to review color grading and final picture in sync with the agency and director.”

At the end of each review session, Frankie allowed Embassy to generate a PDF summary that included all comments, notes and marked-up screenshots, all of which were frame accurate. They sent the PDF through to the editor and compositor, as well as the client. Embassy found that having the PDF summaries brought a level of accountability to the whole session.

“The PDF summary acted as a full stop, removing a lot of the subjectivity from the review, and helped avoid miscommunication about direction,” van Jaarsveld said. “We gave our clients a day or two to look it over and see if anything had been missed. It was lovely to have it as a reminder and to show clients the feedback they gave us, leaving less room for interpretation.

“The PDF summary is a killer feature. It’s the single most important part of the system. As much as everyone is wowed by the fact that they can watch their film together and do the annotations and mark up the screen in real time, that’s nothing compared to what happens when they receive the PDF.”

Embassy started out as a postproduction facility in 2007, doing commercial post directly for ad agencies. Over the years it was asked to shoot commercials, corporate videos and training videos and that led to the full-service production company it is today. The main studio is in Johannesburg, with 26 staff, including compositors, editors, cinematographers and client-service producers. It also has a post studio in Cape Town, working mostly with ad agencies in the city and servicing work that comes from its London satellite office. The London site works with clients such as Unilever and BP and relies heavily on the team in South Africa to complete post. Each office has its own creative director and runs its own creative.

“Our London office will send the brief to us in Johannesburg, we’ll farm out the work to the artists and then we send our work back to London for review,” van Jaarsveld explained. “We depend on Frankie to make sense of connecting our three sites.”

Once a week the creative directors from the three locations come together in a Frankie session to review all the work done by the company during the previous week, as well as any dailies or problem shots they need help with. These sessions involve 6-7 people and can last up to an hour-and-a-half.

“We rely on Frankie for everything from videocasting, to offline approvals, to approvals of VFX,” van Jaarsveld noted. “It’s indispensable to overcome the barriers of geography, bringing everybody as close together as possible. Meeting like this helps team spirit and allows us to regularly share our group expertise in an easy manner.”

As a general rule, everybody at the shop can either design and edit, or composite and shoot, or direct and write. Van Jaarsveld insists on this type of collaborative culture, which is essential in a market like South Africa where there are very few spots for niche specialists. “This is just one more reason we love Frankie,” he said. “Because our guys are multi-skilled, they need to plug in at various stages of the pipeline, often necessitating work over evenings or weekends.”

“Frankie is a game changer because it’s browser-based and multi-platform,” van Jaarsveld said, noting that he loves being able to run it from his iPad. “We used to tape other review solutions together with gaffer tape and hope for the best. Now, with Frankie, there’s no looking back.”