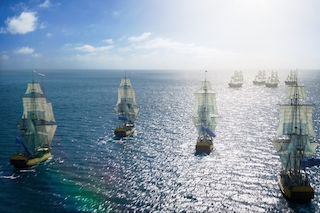 The Madrid-based digital post-production company Twin Pines was responsible for the visual effects in La Fortuna, the new Movistar+ series directed by Alejandro Amenábar. Overall, the series contains around one thousand digitally retouched shots which called for a year’s work to recreate underwater scenes, an epic naval battle, and a road journey in the United States, among many other sequences.

After working together for the first time on the movie While at War, for which Twin Pines was nominated for Best Special Effects in the Goya Awards, the director and studio teamed up again, this time to adapt the graphic novel The Treasure of the Black Swan by Paco Roca and Guillermo Corral for television. The story of this passionate journey in time and its many different scenarios presented many unique challenges. 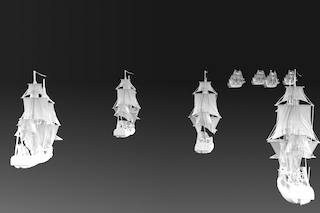 “Without a doubt, the underwater sequences were the most complex, as we had to create them completely by computer or what we call full CG,” said Juanma Nogales and Ana Rubio, the faces behind Twin Pines. “We would normally integrate our effects into the look designed during shooting, but in these sequences, there was no existing footage, so we had to create everything from scratch: art, environment, lighting and physical simulations, basing it all on the storyboard and the director’s instructions.”

As one of the main narrative elements in La Fortuna, the underwater world had to be both realistic and cinematographic. To this end, Twin Pines created a series of 3D elements including sand, plants, coral, rocks, vessels, and cannons, which were then aged by computer to convey a convincing effect. In addition, they also had to create two looks: one for the shots from outside a remotely operated underwater vehicle and other from inside the ROV, which would be seen on the screens of the American and Spanish ships. 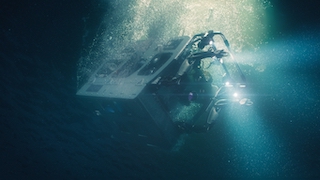 Likewise, the impressive naval battle that took place during the series posed one of the biggest technical challenges for Twin Pines. In this key sequence during the series, the visual effects were crucial: explosions, cannon fire, gun shots, sinking ships and a combination of real and 3D-generated ships were all part of the meticulous and painstaking FX work.

“We approached all the 3D elements based on the previews we did with Alejandro, and we worked until the last second on improving these shots, creating dozens of versions of each part and working on different phases,” Nogales and Rubio explained. “It involved the greatest deployment of resources we had ever undertaken so far.” 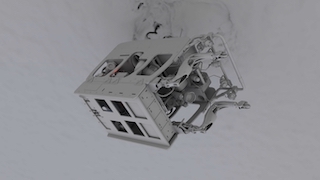 This particular sequence required countless hours of simulations, rendering machines, motion capture technology, scanning of ships, places and characters, as well as animatics and chromas. “The naval battle was the first thing we started on and the last thing we finished, but it was also the most satisfying sequence for Twin Pines as a VFX studio,” they said.

The simulation of a complete sequence of an automobile journey on U.S. roads was another of the big challenges in La Fortuna. Footage of Spanish roads was used for the exteriors and a recording with chroma on the film set for the interiors. The 3D composition included creating the road signage and the various elements of the landscape like bridges, buildings, speed barriers and the cars driving in both directions.

Owing to the complexity of the project, especially in the historical period scenes, the plan was to begin in summer 2019 with the prior scanning of the real ships that were to be used in filming. Afterwards came the preview of the sequences with the scanned material and a study of possible camera angles together with Amenábar.

During the project, Twin Pines enlisted a range of Autodesk software including Nuke for the composition; Houdini for simulations; Maya and Clarisse for 3D scenes; and Arnold for rendering. In addition, Twin Pines’ working method always involves the development of specific tools by its engineering team with the goal of optimizing results and adapting to the needs and requirements of the individual client.

Rubio and Nogales said this project came at one of the best moments for Twin Pines, following the expansion of its headquarters with a major overhaul of its technological infrastructure and recruiting new creative talent, not to mention having recently won a Goya Award for Best Special Effects for its work in Akelarre by Pablo Agüero. “From the VFX viewpoint, being able to bring to life the complicated scenes called for by La Fortuna was an incredible experience. We successfully met challenges that were at the level of the biggest studios in the world in a project with a high international profile”, they concluded.

To view a reel of Twin Pines with effects from La Fortuna, follow this link: https://vimeo.com/662237592