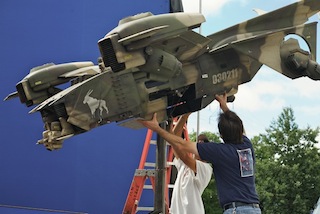 32Ten Studios, San Rafael, California provided a number of practical effects for Elysium, some of which were done well before principal photography on the film even started. Elysium, from TriStar Pictures in association with Media Rights Capital, was the box office winner in its first weekend.

The practical effects team from 32Ten Studios (working at that time within Kerner Optical) began their work on Elysium in 2011 by building and executing several shots for the film on the back lot on Kerner Boulevard, base of 32Ten Studios.  The team built a 50-foot by 50-foot outdoor model of part of the space station at 1/12 scale, featuring buildings and landscaping on Elysium.

The film’s Raven Shuttle was mounted on a travelling rig, and the team at 32Ten crash-landed the shuttle into the set. A seven-camera shoot captured the action of the shuttle crash – the sequence involved flying Red Epic cameras and other cameras that were hidden within vegetation.

Elysium writer-director Neill Blomkamp came to site of the shoot at 32Ten and was impressed with the realism of the chaos that had been created by a practical miniature shot. In an unusual procedure, this miniature shot was done well before principal photography even began, because the ensuing wreck had to be created on location. The miniature shot of the shuttle had to later be matched precisely on the full-size set on location. 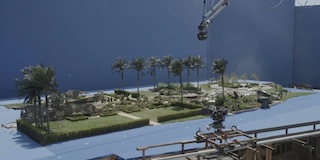 During post-production for Elysium, a team from Image Engine worked in tandem with the same practical team, now operating as the FX Group within 32Ten Studios.  In this capacity, 32Ten supplied explosion elements for a sequence in space – the explosions had to appear as they would actually appear in zero gravity. This imagery was a specialty achieved by the 32Ten team, as they gained extensive similar experience during their years with ILM creating the Star Wars movies and numerous other space-based epics.

Shawn Walsh, visual effects producer for Elysium said, "The team at 32Ten Studios is easy to work with, they understand the pressures, budgets and time constraints involved with complex productions, and are willing to be flexible in delivering exactly what is needed."

Adds Peter Muyzers, visual effects supervisor for Elysium, "The practical effects team assembled at 32Ten Studios is unmatched in terms of experience. The shots they gave us were just what we needed, adding that extra layer of realism Neill Blomkamp was looking for.”