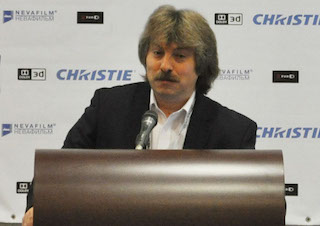 The Event Cinema Association has announced the launch of an ECA chapter in Moscow to help grow the event cinema sector in the Russia and CIS territories. ECA board member and industry veteran Oleg Berezin of Nevafilm, St. Petersburg, will run the chapter.

Nevafilm is a long-established and well-regarded film distributor, dubbing studio and partner to the major studios and event cinema producer and distributor in the region, with its own distribution label, Nevafilm Emotion. Berezin is the author of Betting on Box Office: Major Cycles and Market Conjecture in Film Exhibition (2015) and is a well-known figure in the film industry, as well as being a passionate advocate of event cinema.

The purpose of the Russian chapter is to popularize and expand the event cinema industry within the Russian Federation, CIS countries and the region in general. The main goal is to inform and educate all participants about the event cinema industry in Russia, promote the events taking place across the region and to provide participants with coaching in booking, marketing and promotion of event cinema. Ultimately it is envisaged that this will lead to the growth of the market and attract new members to the ECA itself.

The Russian Section of the Event Cinema Association was presented October 20 during the Kinopoisk Film Market, the international market for producers, distributors and film exhibitors.  On the panel discussion about alternative content in Russia the speakers included Berezin, Pavel Dedyurin (theatrical Russia) and Maria Bezenkova (head of distribution department, Nevafilm JSC). Together they presented the Russian section of the ECA to press and guests and informed the audience about the role of the organization, membership benefits, and presented the association and benefits of membership to the assembled guests.

Berezin said, “I think that joint discussion on promotion and distribution will help all market participants to understand the world of alternative content. In addition we hope that the participation in the international recognized organization of the ECA will help new participants quickly understand processes in event cinema in our region.”

Bezenkova said, “We think that new possibilities of common discussions will help to drive event cinema in Russian-speaking countries and we are proud to use best practice and networking opportunities from our international colleagues. We look forward to welcoming new members to the ECA.”

Melissa Cogavin, managing director of the ECA added, “This kind of local initiative with dedicated education and promotion is exactly what the event cinema industry needs to help grow and we are delighted to support Oleg and Masha in their excellent work in Russia and across Russian-speaking territories.”

The ECA also has a U.S. chapter, run by Jonathan Ross who is based in L.A.