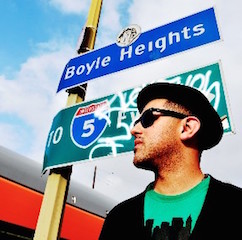 An amazing story nine years in the making, East LA Interchange was honored with the Best Feature Film award at the New Urbanism Film Festival and was also named the Audience Award winner by the Highland Park Independent Film Festival and the Downtown Film Festival L.A., where it World Premiered in July to sold-out crowds.

East LA Interchange follows the evolution of working-class, immigrant Boyle Heights, from multiethnic to predominately Latino and a center of Mexican-American culture in the U.S. Boyle Heights was once far more diverse than any U.S. city; Mexicans, Japanese, African-Americans, Russian Molokans, Armenians, Italians, and the largest settlement of Jews west of Chicago lived and worked together side by side. The film shows how this Los Angeles neighborhood survived the construction of the largest freeway system in North America that threatened to destroy their proud community.

Though the documentary explores this one community, it also asks if Boyle Heights and countless communities across the United States like New London, Hartford, and New Haven will survive the next round of challenges from discriminatory immigration policies, industrialization, environmental pollution, development and gentrification.

The neighborhood of Boyle Heights is a microcosm illustrating how the march of time and the decisions made in the name of progress affect citizens and communities, and what they can do to have their voices heard. East LA Interchange provides a compelling look at what the future of America can be if communities like Boyle Heights work together to secure our nation's pledge of providing justice for all.

The filmmaker, cast and crew are attending and will participate in a Q&A after the film.