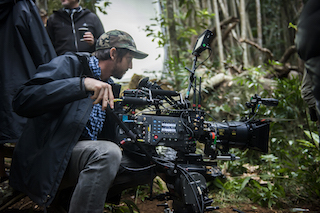 Cinematographer Stefan Duscio recently finished shooting Greg McLean’s psychological thriller Jungle: A Harrowing True Story of Survival, based on Yossi Ghinsberg’s memoir. The film recounts Ghinsberg’s 1982 journey through the Amazon where he ended up alone for three weeks before being found and rescued. Jungle stars Daniel Radcliffe in an Arclight Films production, directed by Greg McLean and lensed by Stefan Duscio.

Production for Jungle was split between Australia’s South East Queensland jungle and Colombia (substituting for Bolivia) along the rivers, jungles, villages, and towns, for its rugged and bigger landscapes. Duscio shot with Cooke Anamorphic/i lenses.

“I used the 65mm a lot and loved it,” said Duscio. “It is such a versatile lens that it gave us the freedom to go from mid-shot to extreme close-ups without a lens change. The 65mm had a beautiful classic Cooke look to it.”

With some of the most intensive pre-production work he has ever done, exploring jungles and climbing cliffs, Duscio wanted a classic adventure film look, but not something hand-held. 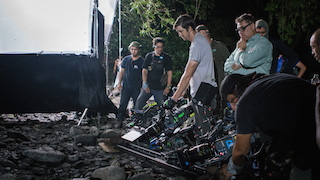 “Almost the entire film is composed with elegant compositions and simple dolly moves, practical and pragmatic setups,” he said. “It was important that the audience be able to watch Jungle effortlessly, with the cinematography not calling attention to itself.”

Duscio had used Cooke lenses already on two previous feature films and various commercials, and thought that, with his desire for big landscapes, Cooke lenses would be perfect for the natural landscapes, skin tones, and faces.

“There’s a real roundness and classic quality to the lenses – sort of vintage,” said Duscio. “Today’s new lenses are way too sharp. The Cooke anamorphics are a beautiful middle ground between traditional anamorphic lenses and going too sharp. They’re classic lenses that just feel familiar.”

The jungles of Australia, while very production friendly (the cast and crew could drive right up to the location), did present some challenging shooting conditions. “It’s very difficult once you’re under the dense jungle canopy,” added Duscio. “It’s really low light levels and you’re shooting almost wide open every day. At 3:00 pm, it starts to get dark with sunset at 5:30 pm, so by 2:30 pm, we’re bringing out large HMIs and bouncing them around the forest to lift the light level under the canopy. I always tried to place our biggest HMIs as far away as possible to give Greg and the cast the creative freedom they needed for blocking, and the cameras the light they needed.”

Duscio used all six lenses in his kit with the 32mm and 40mm for wide setup masters and close-ups on the 75mm — as he likes to have the camera a bit closer to the actors - plus the 100mm and 65mm.

“We tested other anamorphics, but the Cooke Anamorphic/i lenses made the biggest impact,” said Duscio. “Once Greg saw them, he was totally on board, even though he had never shot with Cooke lenses before.”