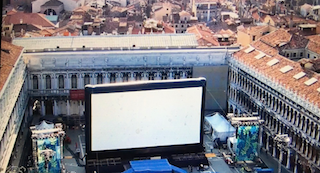 I logged in for two reasons. First, I wanted to see how the exhibition business is finding new (or dare I say re-imagined) ways to get movies on the screen for its patrons in the time of COVID-19 lockdowns – and second, to see if high brightness laser illuminated projectors are playing an enabling role. I was not disappointed in either case.

Drive-in theaters were all the rage in the ‘50s, peaking at 4,063 outdoor screens in 1958, despite using film projectors and small speakers that hung from a partly rolled down window. Due to factors both cultural, such as competing entertainment options, and economic, mainly increased real estate values for alternative land uses, screen counts declined continuously from the peak to only 549 screens at 305 locations last year.

Then came COVID-19 and the lockdowns. Exhibitors went from a record-breaking box office start in the first two months of 2020 to a dead stop by the end of March. But then some enterprising exhibitors looked back and decided they could update ‘50s drive-ins, build new pop-ups or hang parking lot screens on the sides of their now-closed multiplexes, keeping their brands alive and patrons happy.

The five presenters included seasoned drive-in owners, indoor theater managers desperate to stay connected to their loyal local and summer tourist patrons and a creative neophyte who had never himself been to a drive-In as a kid.  There was lots of cleverness and learn as you go – but all animated by the love of cinema and the spirit of can do. Inflatable screens have been deployed to bring outdoor cinema to some unlikely places – like the one pictured here in Venice for the Venice Film Festival.

My question was: are laser projectors being used in drive-ins? To answer that, Barco sales director Joe DeMeo interviewed Transit Drive-In Theatre CEO Rick Cohen who runs a five-screen multiplex in Lockport, New York, near Buffalo, that has been in his family for three generations since they acquired it in 1957.  All the years I’ve spent promoting laser cinema, I always thought that drive-Ins could profit from their benefits, which include double the brightness of the best xenon projector; better color and contrast, and power savings.

Cohen described seeing a laser projection demo in Rochester ten years ago and was sold. His company held out until 2012, hoping they could go digital and laser at once, but they ultimately decided to convert to digital and wait a bit longer to go laser. They finally pulled the trigger on laser this year and the projector in May, just in time for the lockdown.

Cohen called the results “phenomenal. Unimaginable brightness on a 100-foot by 41-foot screen,” he said. His first laser screen, the biggest of the five, went from being the dimmest to being the brightest. The Transit Drive-In Theatre will soon be the first all laser, drive-In multiplex – bringing the benefits of laser-illuminated projectors to all five screens.

Bill Beck was the founder of the Laser Illumination Projector Association. He now serves as LIPA’s communications consultant. This article was edited from the original, which can be found on the LIPA website at https://www.lipainfo.org/ and is published with their permission.