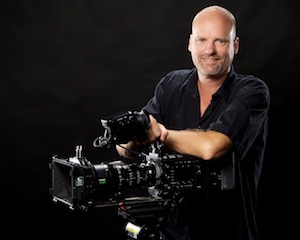 “Once I decided to move up to a 4K camera, I needed to have better glass,” said Nelson. “While image quality is without question extremely important, I decided to buy this particular camera and lens because they offer very beneficial operational and logistical advantages.”

Nelson often has to pack up his camera gear on short notice to fly to production locations around the U.S., and sometimes even shoot in two different cities in one day. Since he flies on commercial aircraft, he is wary of checking many heavy bags because it adds to travel costs. When he arrives on-location, he wants to set up his camera gear as quickly as possible and minimize lens changes to save time.

“Every time you need to change a lens, that’s time away from shooting, lighting, or talking to the director,” said Nelson. “With Cabrio’s 19-90mm focal range, I don’t have to interrupt the shoot for lens changes as often. Saving time is especially valuable since I work on jobs with smaller crews and very tight deadlines. With its compact, lightweight package, the Cabrio is also very easy to transport and set-up.”

“I shoot a lot of interviews where the subject is between eight to 15 feet away from the camera,” said Nelson “Doing critical focusing in 4K in low light situations can be extremely frustrating with a zoom lens with a focus ring that doesn’t rotate much in the critical 8-foot to 15-foot range. The Cabrio is an exception because the focus ring rotation gives you ample ability to focus the lens for critical 4K focusing, and the barrel markings are extremely accurate. The features on this lens just make my life a lot easier.”

The PL 19-90 Cabrio features an exclusive detachable servo drive unit, making it suitable for use as a standard cine PL Mount lens or as an ENG-style lens. Nelson prefers to shoot with the handgrip on the lens. Having the handgrip and zoom motor built into the lens—and no need for external zoom motor hardware and cabling—were other key factors leading to his purchase of the lens.

With the longest focal range of any lightweight zoom and a T2.9 aperture, the PL 19-90 Cabrio lens covers a 31.5mm size sensor on a digital cinema style camera, such as the Sony PMW-F55. The F55, which has a 35mm CMOS sensor, can record 4K/2K/HD simultaneously onto an internal recorder as well as 4K/2K onto an external Raw recorder. Nelson said that shooting multiple formats simultaneously is important because his clients increasingly want an immediate compressed version of the footage, so they can start rough cutting it right away, but then take the 4K resolution into post-production.

When Nelson went to the 2013 NAB Show to look at 4K cameras and lenses, he admits that the Cabrio wasn’t on his short list: “As an owner/operator, it’s a big deal to spend more money than you budgeted for equipment, but I just wasn’t happy with the choices in my price range. I was very close to buying another brand lens when I choose to take another look at the Cabrio. When I realized the features and functionality I’d be getting with the Cabrio and Sony F55, I decided to go for it, and now I’m really glad I did. I’ve even been able to take projects I would’ve turned down as a result of having this exceptional camera gear.”