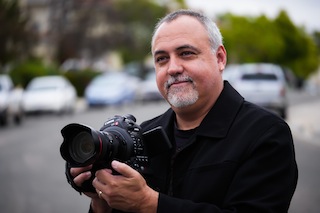 When former photojournalist, director of photography Erik Naso was asked by his TV station to create new promos for the station he wanted each spot to have a cinematic quality that differed from the station’s regularly aired ENG-style videos.

“With ENG cameras, you don’t have control of depth of field,” Naso said. “If you want to control it, you have to have a longer lens, zoom in from far away, or zoom in to compress the background to create a shallow depth of field. With the Canon EOS C100 camera, you can be five feet away, open up your iris, and adjust your neutral density (ND) filters to gain more shallow depth of field or more control over that look, which makes production so much easier.”

Ergonomic and highly mobile, the EOS C100 camera body without accessories weighs just 2.2 lbs. and includes a removable, side-mounted rotating pistol grip, which Naso found convenient for various shooting styles. Naso’s promo shoot entailed two ten-hour days of filming the station’s anchors and reporters “documentary-style” as they walked through city streets, so weight and form factor were a major consideration for him when choosing a camera. He cited multiple features of the Canon EOS C100 digital video camera as having been crucial to his needs as a director of photography and to the success of the project. In particular, he found the camera’s control buttons and pistol grip to be conveniently located.

“The f-stop dial, magnification controller, and a mini joystick navigator are right on the pistol grip, which puts them – including the record button – right at my fingertips,” he said. Naso also has special praise for the pistol grip itself, an item he feels other manufacturers don’t always get right. “You’re really not going to use it, because it’s not functional,” he said of the other cameras. “Canon, however, really thought this out on the EOS C100 camera. The grip is removable, so if you want to create some sort of shoulder rig or change it ergonomically, you can take the grip off and add an extender to it. The options are there for a third party to get involved and make accessories to allow for different configurations, and that is just awesome.”

In addition to its removable pistol grip, the EOS C100 features a detachable handle that connects to the top of the camera, as well as dual XLR connectors, a built-in stereo microphone, a bracket for an external microphone, audio-input level adjustments, and a tally light. Adding to the camera’s ergonomic flexibility is the fact that the Canon EOS C100 camera’s function buttons are reprogrammable, allowing the operator to reassign them for a specific purpose and shoot in the style he/she prefers.  “Having those buttons where you already have your hand when shooting, and being able to get the access easily to those buttons, is a major advantage,” Naso said.

Naso’s favorite features for adjusting the 1920 x 1080 HD image of the Canon EOS C100 camera are its autofocus button, its magnification capabilities, and its built-in waveform monitor. “I really like where Canon put the autofocus button,” he said. “Instead of being on the side of the body, it’s down on the bottom front corner, the closest button to the lens. So you can just touch that and right away you get your autofocus nice and close.” The C100 also features customizable button functionality allowing users to assign buttons specific functions to meet their personal preference. Naso added that his favorite feature is the EOS C100 camera’s magnification capabilities.

“Being able to use the magnification feature, to zoom-in when you are recording is a gift,” Naso continued. “It really helps you obtain the proper focus, because when you visually go into it and focus on somebody’s eyes, and you see them sharply, there is no doubt about whether they’re in focus. It’s reassuring. Peaking can give you this sharpness around a detailed area, but it can be deceptive. Your viewfinder or your detail setting could be right, but they could also be too high or too forgiving of your camera, and then you’re not really seeing what you’re supposed to be seeing. With the magnification on the EOS C100 camera, you can – at the touch of a button – zoom in, and even if it’s not zoomed in on your subject’s face – if you can just tell by his or her shirt that they are in focus – then you’re good.”

As with Canon digital SLR cameras, the EOS C100 is an EF-mount camera compatible with Canon’s array of more than 60 EF-Series prime and zoom photographic lenses (including macro, fisheye, telephoto, and tilt-shift models). A user of Canon’s digital SLR cameras, therefore, can employ the lenses he or she may already own with the EOS C100 camera to achieve a wide range of creative choices. The EOS C100 digital video camera can also be used with the EF-mount versions of Canon’s Cinema zoom and Cinema prime lenses. Although Naso prefers the Canon EF 24-105mm f/4L IS USM zoom lens for the EOS C100 camera, he has also uses the Canon EF-70-200mm f/4L IS USM telephoto zoom and the EF 50mm f/1.8 II standard lenses, which are a part of his lens collection.

“You can use any EF or EF-S lens on the EOS C100 camera, which is pretty amazing,” Naso enthused. “Being able to carry across a lens, especially one from the EOS 5D Mark II or EOS 5D Mark III digital SLR cameras to the EOS C100 digital video camera really gives you a tremendous amount of flexibility. The Canon EOS 5D Mark II and EOS 5D Mark III digital SLR cameras revolutionized the moving-picture world with their large-format single CMOS sensors. Also, the built-in adjustable ND filter on the EOS C100 camera is very handy. It means you don’t have to carry around a bag of screw-in filters for every lens you own. It keeps the package light, which is important to me.”

The Canon EOS C100 digital video camera features three built-in ND filters (2, 4, and 6 stops, and OFF) that are deployed using a manual dial.

Naso adds that he gets a “clean look” from using the Canon EF 24-105mm f/4L IS USM zoom lens. “If there is a lighting issue, and you can’t open up the lens past f/4, you can open up the base ISO in the EOS C100 camera pretty high before you start getting too much noise,” he elaborated. “With the EOS C100 camera, I can go up to 3000, and it’s a beautiful, organic grain. It’s got this very filmic, very natural organic look to it – not those green and blue ‘freckles’ of RGB noise that you get from a digital ENG camera. The rich look of black and white film grain is the kind of look I’m seeing in color with the EOS C100. It adds the passion, the romance, of classic black and white filmmaking to the EOS C100 camera’s color cinematography.”

Naso chose to shoot the promos using the C100’s Canon Log Gamma setting, which records images with subdued contrast and sharpness, preserving a high dynamic range for post-production color grading. “Being able to shoot Canon Log allows me to open up my shadows, so when I’m editing, I can decide if I want viewers to see in the shadows or not,” Naso explained. “If I don’t have that exposure in the shadows, if I bake that look and I’m crushing my blacks already in the camera, and then I decide I want you to see into those shadows, that information is lost without the Canon Log. So, it’s important that I have that control. I use Adobe® Premiere® Pro CS6 and edit natively off that. I feed the card to my hard drive, which allows me to edit without having to do any transcoding. I like it because it’s less compressed, which makes it faster to edit.”

“Large-sensor cameras have changed the way I shoot and produce, and have enabled the station I work for to differentiate itself in the market,” Naso concluded, adding that he has written about his experience on his blog, eriknaso.com. “The Canon EOS C100 is the most ergonomic camera I’ve used so far. It’s easy to hand hold, so I could shoot with it all day. With the EOS C100 camera, I’m now thinking more about the composition and how the background will play into it. It’s really opened up my creative potential.”