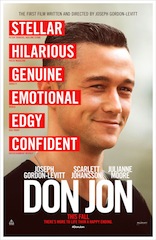 Joseph Gordon Levitt is arguably one of the best actors of his generation. Scarlett Johansson started out at a very young age displaying huge talent. Now he and she are together in a movie with an interesting premise, but one that, as it unfolds, seems repetitious, thin, padded out.  Even at about 90 minutes, it feels too long – not for the story it intended to tell, but for the way it’s telling it. This is a movie about movies and how they shape our perception of life.  He is into porn, she is into romantic comedies; both are dissatisfied because real life never measures up to what they see on screen. It stays with his point of view in a way that makes him seem a bit naïve – and her, more than a bit selfish.  In this, his directorial debut Gordon-Levitt focuses much too much on himself in a role so filled with bluster and bravado that we never really like him.  Although her character is dismissed, Johansson does have one great confrontational scene where she shows her depth as an actress; this would have been a much better movie if she had much more to do.  Julianne Moore brings a nuanced and genuine performance to her role that seems borrowed from Y Tu Mama Tambien in more ways than one.  All in all, Gordon-Levitt had a good idea for a movie; it’s unfortunate that he really didn’t make the film to do it justice.