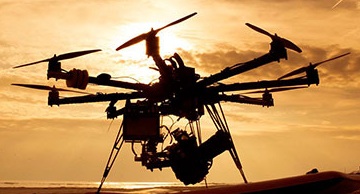 [Editor’s Note: This article is excerpted from the Digital Cinema Society eNewsletter, July 2014, and is published with the author’s permission.]

The world is abuzz with talk of Unmanned Aerial Vehicles and in order to avoid conjuring up images of CIA missile strikes, or NSA spying, I’ll avoid using their more common name – drone.  The technological and commercial promise of this mode of aviation seems boundless.  Amazon talks of delivering packages this way someday soon. Someday you might order a pizza and a UAV will make a beeline navigating by GPS over traffic right to your door. But as things stand today, professional filmmakers in the United States are not allowed to use UAVs on a movie shoot.

A low altitude bird’s eye view is now available where it might be too dangerous for a manned vehicle to tread for such applications as fighting fires, military or police operations, search and rescue, toxic emergency evaluation, etc.  As the technology improves and costs come down, many more units have taken to the skies. They are proving useful for such applications as security, aerial surveys for real estate and agriculture, but of course, my interest pertains to their uses related to filmmaking, and in particular the class of radio controlled unmanned crafts weighing less than 55 pounds.

However, as with most new technology, a lot of regulatory confusion abounds. This is especially true in the case of UAVs, as there are plenty of legitimate concerns in regard to public safety, privacy, and even homeland security if they were to be improperly employed. The U.S. government first directed the Federal Aviation Administration to sort through the morass as part of the FAA Modernization and Reform Act of 2012.  It called for comprehensive guidance for operating what they call UAS, or Unmanned Aerial Systems to be ready by September 2015.  However, it now seems likely that this deadline will not be met leaving quite a state of confusion in regard to pending rules and regulations.

In the interim, commercial use of UAVs seem to be prohibited, but the FAA has recently offered guidance and definition for what it terms model aircraft, including among other requirements that “they not interfere with manned aircraft, be flown within sight of the operator and be operated only for hobby or recreational purposes.” They specifically reaffirmed that these “provisions apply only to hobby or recreation operations and do not authorize the use of model aircraft for commercial operations.”  I should also note that after such troubling episodes as UAVs hovering too closely around mountain climbers at Yosemite’s Half Dome, they have been at least temporarily banned in the entire National Park system. 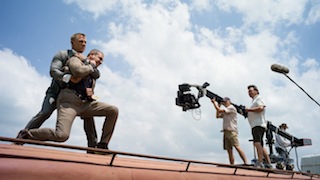 Currently, it would seem then that the sky is pretty much the limit for hobbyists, (pun intended), who are not required to have any training or even a test of common sense; but where does that leave those in the U.S. who would seek to legally employ UAVs for professional filmmaking?  Although used internationally for such well-known films as James Bond’s Skyfall, and The Expendables, such use by motion picture producers in the U.S. is currently prohibited.

As Los Angeles area moviegoers of the 1990s may remember, there was a Los Angeles Times Calendar ad that used to run during movie previews depicting a behind-the-scenes look at an action sequence starring Jean-Claude Van Dame.  Among other dynamic shots, it featured an unmanned helicopter chasing him on a motorcycle as he tore across a desert landscape.  That, I believe, was more than twenty years ago, so it is hard to fathom that today’s, safer, smaller, more advanced, and precision controlled vehicles are not allowed for commercial cinematography.  However, that seems to be the case.

The Industry already enjoys well-developed technology for manned aircraft with experienced professional teams that have made the specialty of aerial cinematography their life’s work.  In fact, two of the most highly regarded aerial DPs in the business are longtime Digital Cinema Society members.  I’m talking about David Nowell, ASC and Michael Kelem.  Between them they are responsible for most of the major aerial sequence seen in blockbuster movies, and have won multiple Emmy Awards.  Recent credits include The Hunger Games, Transformers, and The Avengers for Nowell and such titles as Godzilla, Captain America 2: Winter Soldier, and Twilight for Kelem.

At their level, they are far more than gyro-stabilized camera operators.  Like any DP, part of their talent is being able to choreograph the synchronized movement of the camera and subject, but with the precision necessary for airborne vehicles operating in close proximity and sometimes traveling at hundreds of miles per hour.  You don’t survive long enough to be a veteran aerial professional without a high degree of attention paid to safety.

Nowell explained some of steps that are taken before the camera ever leaves the ground. Beyond the normal film permit process, special prior approval by the FAA and local jurisdictions are required for a mission including specific flight plans, emergency landing zones, and certified personnel and equipment.  And not just any pilot will do; in order for pilots to be cleared for this kind of work and flying below 500 feet for anything other than take-offs and landing, they need to adhere to the Movie Manual.  This is a further set of rules and record keeping requirements specific to aerial filmmaking and far more comprehensive than a regular fixed wing or even rotorcraft type of commercial pilot license. The idea is to insure that only experienced professionals will attempt this type of work. 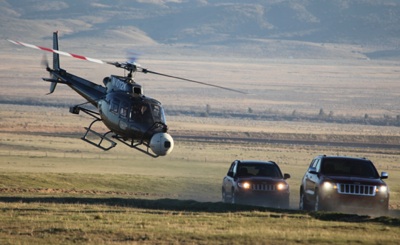 Kelem is the first to admit that, despite the fact that UAVs can go places that a helicopter can’t, “like any other piece of equipment, purchasing it doesn’t make you its master.” Just as falling prices for land based cinematography tools have brought down the barriers to entry, so it is with aerial systems. They are now accessible to the masses, but owning a radio-controlled copter with a camera does not make you an aerial DP.

UAVs for cinematography can be had for mere hundreds of dollars, and quality varies greatly.  According to Filmtools owner Stan McClain, who himself spent many years as an aerial cinematographer, “When a certain relatively low cost quad-copter hit the market, we sold hundreds of them. We also had almost as many customers returning their ‘defective’ units asking and even demanding a full refund. Virtually 75 percent of the owners had crashed their new aerial camera systems. The Chinese company under-estimated the need for prompt customer service, and we decided to quit selling them.”

Even as hobbyists, owners need to be proficient at handling their aircraft and they must be well versed in the laws and procedures regarding their operation. But in addition to hobbyists, there are a growing number of filmmaking professionals that would like to step in and meet the need that exists between a full blown manned aerial cinematography mission, and the kind of shot just about anyone could pull off.  There would seem to be a good niche market for a qualified owner/operator.

One such professional is founding DCS member Dan Coplan, SOC, a Steadicam operator with whom I have worked extensively over the years.  Just as he had done previously preparing for Steadicam work, he has now invested tens of thousands of dollars and hundreds of hours of training in hopes of being able to also provide aerial services to motion picture productions; currently, however, that is illegal.  Even Nowell, who is fully qualified for manned aerial work and has partnered in a venture to offer top-flight UAV personnel and equipment to the major studios, is currently prohibited from commercial operation.

Another DCS member who is a post-production professional, (director of technical operations for Technicolor Creative Services), and currently terms himself as an aerial cinematography enthusiast, is Robert Rodriguez ("not the famous director”, he is quick to point out). Rodriguez hopes to grow into the professional cinematography ranks, but believes this path is at risk with pending U.S. regulations making it difficult for people to work their way up, and practice their craft as aerial cinematographers.  He has organized the Society of Aerial Cinematographers, which recently held it’s inaugural education and training event at AbelCine in Burbank.  The group hopes to advocate for, and help those interested in, pursuing the use of UAVs for professional filmmaking, further their training, keep abreast of the latest governmental regulations, and always keep operational safety as a priority.  Most everyone agrees that we would all be better served with some sort of governmental oversight, but what level of regulation is the question? 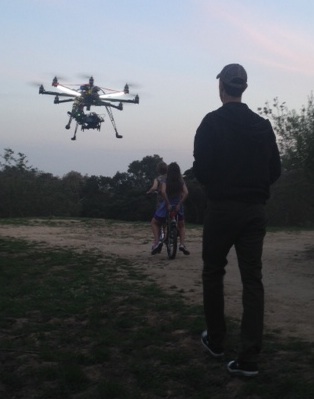 A group of industry aerial cinematography stake holders, including leading aerial systems provider Pictorvision have gotten together to seek individual exemptions from the current prohibition.  Pictorvision’s Tom Hallman explains, “Seven independent companies working in conjunction with the MPAA teamed up to author operating policies and procedures that could hopefully satisfy the concerns of the public, the FAA, and the film production community in order to allow professional cinematography in a safe and sane manor.” They filed seven separate, but identical applications simultaneously, for an exemption that would allow each of them to commercially operate UAVs for cinematography under very strict guidelines that they have set forth. For example, it only deals with closed-sets after the entire production crew has attended a safety briefing to prepare in the event anything should go wrong, just as if they were doing any stunt.  This would presumably alleviate any safety or privacy issues involved with flying over the general public.

Although the new rules have yet to be determined, this unofficial professional consortium believes their ability to operate in the interim under their proposed guidelines might help to serve as a test bed in determining what the eventual permanent rules should be. They may require a licensed pilot, and ongoing close review of maintenance and training records with prior approval by the FAA and local jurisdictions of specific flight plans; basically most everything necessary to operate a manned aerial system.  However, if as expected, these seven entities are exempted from the commercial ban, they will be the only ones, at least for a period of time, able to operate legally.

Some would definitely question the fairness of this kind of major competitive advantage, having a lead of what might be as much as a couple of years.  Yet it may help to carve through the current logjam.  As attorney Paul Fraidenburgh, who specializes in matters related to aviation and aerospace, points out, even though there are many other commercial applications awaiting regulatory guidance from the FAA, the film industry is now shaping the future of unmanned aircraft systems. The FAA faces significant barriers to safely integrating these systems into the national airspace system in time to meet their goal of September 2015.  They consider petitions on a first come first served basis, and since the motion picture industry has been by far the most proactive in seeking exemptions, they will be shaping the market.  Everyone else will need to play catch up by filing petitions to reserve a place in line if they hope to have a voice.

In the meantime, it is clear that the MPAA is not allowing any of their member studios to use UAVs until this is all completely worked out.  Besides safety and legality, union jurisdictional questions have arisen: perhaps the biggest one is which union will represent UAV operators? Everyone wants to see UAVs used correctly to best serve the motion picture process, but what the specific rules are and who has a voice in creating them is open for much more discussion.

James Mathers is a Los Angeles-based cinematographer and is the co-founder and president of the Digital Cinema Society. To participate in this conversation visit the society’s Facebook page to share your thoughts.