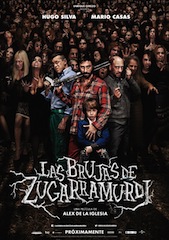 In addition, Odeon and UCI Cinemas Group plan to equip 27 screens across Europe with Dolby Atmos. The new sound format has been embraced by leading exhibitors worldwide, and the number of planned installations across Europe, the Middle East, and Africa (EMEA) has doubled, bringing the total count of planned Dolby Atmos screens worldwide to more than 200, a fivefold increase from the 40 screens that had been equipped just six months ago.

“The addition of these new titles shows how Dolby Atmos has been embraced by major studios and directors from around the world,” said Andreas Spechtler, regional vice president, EMEA, Dolby Laboratories. “With Dolby Atmos, filmmakers can position and move sounds anywhere in the theatre, even overhead, for the most realistic and lifelike audio experience – giving movie fans a whole new reason to go to the cinema.”

Las Brujas de Zugarramundi, directed by Álex de la Iglesia and produced by Enrique Cerezo, will be presented at this year’s San Sebastián International Film Festival in Spain in September.

Mindscape is a Spanish-Canadian co-production and psychological thriller, directed by Jorge Dorado, and a production of Ombra Films, the Safran Company, and Atresmedia Cine, in association with Roxbury Pictures. It will be presented in September at the Toronto International Film Festival in Canada.

Tarzan 3D, directed by Reinhard Klooss and produced by Klooss and Robert Kulzer, will see one of the most famous figures in world literature return to the screen in spectacular animated fashion, 100 years after the character’s creation. The opening of the film will take place in Germany in October, distributed by Constantin Film.

Mr. Go, the first Dolby Atmos title from Korea, tells the story of an orphan Chinese girl who builds a friendship with a gorilla destined to become a professional Korean baseball star. The film was mixed by Dexter Lab, the first Korean studio to work with Dolby Atmos. Audiences will be able to experience the next-generation Dolby sound format when Showbox releases the film in Korea on July 17 and Huayi Bros releases the movie in China on July 18.

Odeon and UCI Cinemas Group, the owner of Cinesa cinemas, announced plans to equip 27 flagship iSens® screens with Dolby Atmos in Austria, Germany, Ireland, Italy, Spain, and the United Kingdom. The first phase has seen seven UCI/Cinesa cinemas in Germany and Spain equipped with Dolby Atmos for the release of the Warner Bros. title Man of Steel.

To date, 38 cinema screens have been equipped with Dolby Atmos in 15 countries across EMEA. In addition, Regal (United States), SPI Cinemas (India), and Wanda Cinemaline Corporation (China) recently announced plans to install Dolby Atmos. These major global exhibitor deployments brings the count of planned installations of Dolby Atmos to more than 200 screens globally, up from nearly 40 screens that had been equipped worldwide just six months ago.

Currently, more than 25 post-production facilities worldwide are capable of mixing Dolby Atmos, many of them in Europe, including: