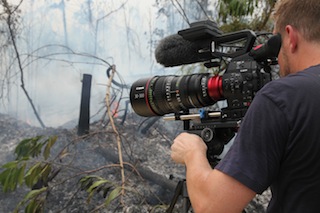 Climate change is a complex global phenomenon. Documenting its many aspects for a new multi-part cable series required an HD production format that could not only provide a cinematic, audience-friendly look but also the flexibility to capture everything from expert interviews to location footage shot in a wide range of temperature extremes. Challenged with these requirements, the producers of Showtime’s Years of Living Dangerously chose Canon EOS C300 digital cinema cameras and a wide variety of Canon optics, including Canon CN-E Cinema prime lenses, for the superb image quality, extreme mobility, and creative capabilities needed to make this multi-camera documentary-style series.

“Our goal with this project is to have its images be just as mind-blowingly great as the story itself, and with the Canon C300 camera we’re getting that,” said Joel Bach, an executive producer and creator of Years of Living Dangerously. “We want this show to look like something that’s never been done before in terms of documentaries and news, in that we’re shooting it to look more like a luscious drama, which will appeal to a broader audience.” Years of Living Dangerously executive producers include famed filmmakers James Cameron and Jerry Weintraub, Arnold Swartzengger, former 60 Minutes producers Joel Bach and David Gelber, and climate change expert Daniel Abbasi. Co-Executive Producers are Solly Granatstein and Maria Wilhelm.

“The image quality of the Canon EOS C300 camera is quite beautiful,” agreed Jennifer Latham, line producer on the series. “It’s also unbelievable how well it can capture footage with great definition in low light. We have taken the EOS C300 cameras up to more than 16,000 feet to a mountain glacier in Chile, where it was 30 degrees below zero with the wind chill on some nights. We have also been shooting in Texas, where it’s hot, windy, and dusty, with beautiful results.”

Filming Years of Living Dangerously has involved as many as three crews working simultaneously in different locations and up to six Canon EOS C300 cameras rolling on any given day. One of several DP’s working on the series is veteran film shooter Wolfgang Held, who has used the EOS C300 camera across the country from the snowy, remote mountains of Utah to suburban New Jersey. Held noted that the EOS C300 camera has become his “main camera” and the one he now recommends most often to other DP’s.

“I love shooting with it,” he said. “I started out in features and now I’m shooting mostly documentaries. The Canon EOS C300 camera is, I feel, the first camera that bridges both worlds. That’s because the EOS C300 camera image quality is beautiful, yet the camera is also travelable and it doesn’t need a big crew to manage it, as some other digital cinematography cameras do. The combination of the lightweight, ergonomic EOS C300 camera and the compact Canon EF lenses I can use with it lets me shoot one-man cinéma vérité style, and pull my own focus as I follow live events. The camera’s peaking function really helps when I’m doing this. It outlines what’s sharp in the viewfinder and it allows me to be sure that the focus is right-on when I’m shooting outside, running and gunning, following people, and pulling focus live.”

Latham noted that another advantage of the Canon EOS C300 camera is its ability to be used with Canon’s line of more than 60 interchangeable EF Series lenses or Canon’s set of EF-mount Cinema prime lenses and four Cinema zoom lenses. “All of our EOS C300 cameras are EF-mount, and this provides great flexibility in the lenses that can be used,” said Latham. “It opens up a lot of creative possibilities.” Latham noted that Held and the other DP’s working on the series are using a wide variety of Canon lenses.

“My workhorse is the Canon EF 24-105mm f/4L IS USM zoom,” Held said. “The lens has a built-in image stabilizer and the perfect zoom range for shooting cinema vérité, where I follow people and capture what’s happening to them live. This lens allows me to do that. We also took advantage of the compact size of the Canon EF 16-35mm ultra-wide zoom lens to shoot inside cars.”

Held described a scene filmed in the mountains of Utah in which he documented scientists measuring methane gas escaping from the snow, and then discussing their findings as they sat in parked off-road vehicles. Working without an expensive car rig, Held took advantage of the compact form factor of the Canon EF 16-35mm ultra-wide zoom on the EOS C300 camera to shoot the scientists’ back-and-forth discussion without interrupting the natural flow of conversation. Sitting in the back seat of one car for “three-quarter” shots of the scientists from behind, Held was able to quickly move to the second vehicle to capture reverse angles. “The EF 16-35mm zoom on the EOS C300 camera was physically small enough to hold while getting into and out of cars, which made it easy to film what would have been a very difficult scene,” he said. “We use a car rig in New Jersey on another occasion, and attached the EOS C300 camera to the hood so we could get a shot looking into the vehicle. We lit the interior a bit, and it worked beautifully.”

“The Canon EF 70-200mm zoom is another lens that I always have in my package to get a more condensed telephoto look,” Held continued. “It comes in handy for interviews and it makes a great second-camera lens. We’ll often shoot with two EOS C300 cameras simultaneously. My EOS C300 camera will have the EF 24-105mm zoom on it, and the second cameraperson’s EOS C300 camera will be outfitted with the EF 70-200mm zoom. I’ll go around and capture the action and then the second camera person follows me and punches in for close-ups of cross-shots of people listening in.”

“Shooting interviews with the Canon EF 70-200mm zoom, and sometimes even using its 2x extender, lets us keep the EOS C300 cameras really far away so that conversations can play out without having cameras lurking right near by,” Bach said. “The personalities we’ve been working with tell us how much they enjoy not having lenses right in their faces. Those EF 70-200mm zoom lenses have been great for that.”

Designed to accommodate virtually any shooting setup, the Canon EOS C300 camera can be hand-held by its removable, rotating side pistol grip, or by its detachable top handle, or used with a wide variety of third-party support devices. This design enables Latham to easily customize the camera for each individual DP’s preferences. “We have so many different shooters,” she noted. “The EOS C300 camera allows all of them to work in a way that’s best for them artistically.”

For DP Wolfgang Held this means holding the Canon EOS C300 camera by its detachable top handle with the camera’s also detachable LCD monitor unit attached. In addition to a fold-down 4-in. 1.23 megapixel LCD monitor (which rotates 135˚ left/right or 270˚ down for convenient operator positioning), the monitor unit includes multiple camera-function buttons, several of which are assignable. Held uses one of them to control the EOS C300 camera’s ISO settings.

“I like the handle because it gives me a good grip to hold onto,” he said. “I use one of the function buttons on the monitor unit to dial-in my ISO as I’m shooting. I can fine-tune the ISO to stay at a certain f-stop when I’m shooting outside and the sun is going in and out, or if I’m going from a dark to a brighter place. The function button allows me to fine-tune my exposure without having to put the camera down and go to the menu. I can do this while shooting, which is a really great feature.”

“As a line producer, the workflow of the Canon EOS C300 camera is really attractive,” Latham said. “The camera has great compression in terms of file size. When you’re looking at shooting the volume of material that we are for this series, the EOS C300 camera is one of the best choices on the market. The workflow for this camera is very simple and a huge money-saver.”

“Canon Log is very important to us,” Latham said. “We shoot at 50Mbps for the biggest, best quality files we can obtain to give our colorist plenty of creative latitude to work with in fashioning the look of the show. From image capture to postproduction workflow, the Canon EOS C300camera is a convenient and affordable cinema-quality camera, which for documentary filmmakers and for television, is great.”

“The affordability of the Canon EOS C300 camera for a show like this one means that we can bring a good number of cameras into the field and capture beautiful images of scenes from different angles, which allows for great editing that makes stories come alive,” Bach said. “Years of Living Dangerously won’t be a dry or boring documentary. It’s going to be fun, great TV to watch, and the cinematic look of the Canon EOS C300 camera is making that possible.”