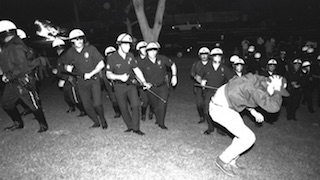 Rough Riders Studios’s feature documentary South Bureau Homicide will be making its world premiere at the 2015 Saint Louis International Film Festival November 14 at the Hi-Pointe Backlot Theatre. Special screenings for the community are being set up in St. Louis and in the neighboring community of Ferguson.

South Bureau Homicide is a two-yearlong cinematic journey deep into the heart of one of the most infamous neighborhoods in the world: South Los Angeles, also known as “South Central”. The film chronicles the present day dynamic forged between the community’s residents and LAPD homicide detectives dedicated to helping an epicenter of homicidal violence heal. The film represents the feature directorial debut for its co-directors, veteran producer Mark Earl Burman (Dog Eat Dog, Falling Sky, Tom Cool) and Mike Cooley. Burman is currently in pre-production on Dog Eat Dog, starring Nicolas Cage, written and directed by Paul Schrader (Raging Bull, Taxi Driver, Affliction), which made its Cannes market debut earlier this year.

Set in LAPD’s South Bureau that spans the southern part of the City of Los Angeles, the film explores the unsung bond created by the homicide detectives of the Los Angeles Police Department’s Criminal Gang Homicide Division and the local community’s anti-violent crime activists. Going against the grain of commonly perceived police & community relations, they traffic in the aftermath of murder, stepping into the breach of loss for next of kin, investigating the crimes, and forging relationships with residents left to live amidst persistent violence.

“After two years in the making, South Bureau Homicide is perfectly positioned to be a vehicle of education and healing first and foremost, and due to recent events that have brought our society to a vital tipping point, this heart-wrenching and heart-warming real-life tale could not have come at a better time,” said Burman. “The glimpse the film provides into what’s happening in South Los Angeles underscores the mission of relationship building the LAPD has pursued since the riots of the 1990s. It provides evidence for the rest of the nation that local law enforcement and the community it serves can forge a productive relationship despite the overhang of violent crime.”

Produced in association with Ronin Media House, the film invites the viewer to become a temporary resident of one of the most crime-riddled areas in the nation and showcases how it has affected the community at large, with people of from all backgrounds and ethnicities working together for a common goal.

South Bureau has historically been one of the most notorious neighborhoods in the nation, with the highest homicide rates across the board yet residents and the criminal gang homicide division have been able to create and maintain a solid bond and are forming an even stronger community that is taking consistent steps to create a solution.

“If the rest of the world could take a page from their book we might be looking at a much brighter, much more understanding future,” Burman continued.

Without taking sides, South Bureau Homicide presents an objective view, neither “Left” nor “Right”, of a horrifying culture of violence plaguing not only South Los Angeles but also many parts of the nation as well. When the filmmakers witnessed the outreach of the LAPD criminal gang homicide division to the community firsthand through investigation, community meetings, and spending time with residents, they realized the big picture was something that had to be shared en-masse.

“South Bureau Homicide introduces the viewer to a cast of real characters whose motives are pure and remarkable in the face of life’s greatest tragedy: homicide.  These unsung heroes toil persistently without fame or notoriety to bring a measure of healing to families whose loved ones are literally stolen from them,” said co-director Mike Cooley, who also shot and edited the film. “We earned unprecedented access with LAPD and the trust of the community by embedding intimately into their lives and experiences, capturing them honestly and authentically.  These people and the work they do speak for themselves.”

LAPD Detective Sal LaBarbera is an Executive Producer on the project and was working on his final case during the filming of the movie.

South Bureau Homicide has various sales and distribution deals on the table with community and major film festival premieres planned ahead of the film’s release. Special screenings at AME churches in South Los Angeles and elsewhere, including Ferguson, Missouri, will kick off the film’s initial grass-roots marketing campaign.