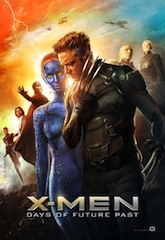 Christie has been selected by preferred partner Digital Media Systems to provide the 3D digital cinema projection technology for the world premiere of 20th Century Fox’s film X-Men: Days of Future Past on Saturday, May 10. DMS will transform the River Pavilion at the Jacob Javits Convention Center into a theater to screen the highly anticipated X-Men sequel, with two Christie Solaria Series digital cinema projectors onto a 26-foot by 62-foot screen.

Directed by Bryan Singer, X-Men: Days of Future Past is the seventh motion picture in the X-Men series and features Hugh Jackman, Jennifer Lawrence, Halle Berry, and Matthew Vaughn.  The world premiere will include some of the film’s stars, other A-list celebrities, and nearly 1,500 additional viewers.

“The River Pavilion presents a challenging layout for the event, as all of the equipment, including seats, projection, drapes, and sound systems, needed to be brought in to create as close to a theater auditorium experience as possible. In selecting the projection system, we knew we could count on Christie’s powerful technology to come through for us,” said Gregg Paliotta, president and owner of Digital Media Systems. “With the projection booth over 140 feet away from the screen, Christie Solaria projectors will light up the screen flawlessly with sharp, vivid 3D images to capture every action-packed minute.”

“We are pleased that Digital Media Systems trusted Christie to fully immerse the audience in the 3D world of the X-men,” said Kathryn Cress, vice president, global & corporate marketing, Christie. “Movie premieres are a great opportunity for Christie to showcase its superior digital cinema technology, and we are confident that our projectors will provide the reliability and flawless visual quality that is needed at such a high profile event.”