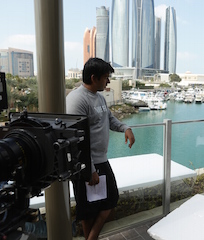 The Bollywood feature Dishoom has wrapped in Abu Dhabi after six weeks of filming facilitated by twofour54. With a final count of 38 filming days, Dishoom is Abu Dhabi’s longest feature filming project to date and is due for release in July this year. The cast and crew arrived in Abu Dhabi in January to begin a non-stop schedule of filming at 30 different locations including Ferrari World, Nurai Island, Emirates Palace, Yas Waterworld, Sheikh Zayed Stadium and Liwa Dessert, with the final scenes shot yesterday on Reem Island. In February, Sajid Nadiadwala, owner of Nadiadwala Grandson Entertainment and executive producer of Dishoom, visited the set and praised the diversity of locations that Abu Dhabi offered.

The majority of all filming for Dishoom took place in Abu Dhabi with more than 90 cast and crew involved in the production during its time in the Emirate. In partnership with twofour54, the Dishoom team gave four young aspiring filmmakers the opportunity to intern on the production, helping to upskill Abu Dhabi’s growing media production talent pool. 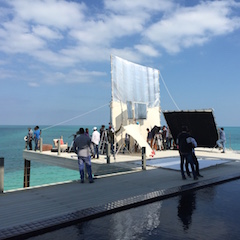 “From the time Dishoom was making plans to film in Abu Dhabi, the Abu Dhabi government entities were completely behind us to ensure that Dishoom enjoyed a world class experience here in the Capital and we are grateful for their support,” she added.

Director of the film, Rohit Dhawan, spoke highly of the experience in Abu Dhabi. “It has been a memorable time filming in Abu Dhabi,” he said. “Working with twofour54 in Abu Dhabi has been very streamlined, they delivered what they promised. On top of that, Abu Dhabi has fantastic locations that have given us beautiful scenes that I am excited for the audience to see once the film is out.”

One of the stars of the action adventure film, John Abraham said, “Abu Dhabi is a wonderful place, and a very film-friendly city. With the marina, desert and city architecture, it really does have everything you look for in a filming location. Twofour54 has done a fantastic job on facilitating the film.”

In addition to Dishoom, in the past three years Abu Dhabi has attracted other Bollywood films Bang Bang! and Baby as well as Hollywood blockbusters Star Wars: The Force Awakens and Fast & Furious 7. Global television programs The Bold and the Beautiful and BBC’s Top Gear have also been filmed in the Emirate. Abu Dhabi is also at the forefront of Arabic content with award winning television series, Al Ikhwa; the new version of Iftah Ya Simsim, the Arabic version of Sesame Street; and popular entertainment news show, ET Bil Arabi all being produced in the Emirate.