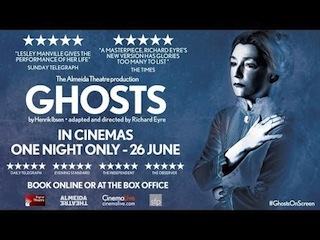 The West End triple Olivier Award winning production of Ghosts – the third title in the West End Theatre Series – was shot in high definition by Digital Theatre and will be distributed in UK theatres on June 26. Distributed by CinemaLive, Ghosts will be the first live event cinema production captured in the Dolby Atmos sound format. This working collaboration will not only enhance the already powerful storytelling on stage and screen, but raises the bar for event cinema.

"Digital Theatre is thrilled Ghosts is the first ever live production captured on film to feature Dolby Atmos. Cinema audiences will experience the benefits of ultra-surround sound, moving ever closer to recreating on screen the thrill and sensation of being in the theatre,” said Digital Theatre’s Tom Shaw.

“This is a hugely significant step in the Event Cinema movement, with the technology moving us another step closer to bringing the immersive experience of watching live theatre to a wider audience," said Helen Jones of CinemaLive

“With Dolby Atmos, we are able to place and move sounds anywhere in the cinema, even above the audience,” said Andy Dowell, regional director for Northern Europe, Dolby Laboratories. “This creates a soundfield that is so natural and realistic, you feel as if you are in the middle of the onscreen action. Digital Theatre and CinemaLive are transforming how we watch performances that are traditionally reserved for theatre. For the first time, a theatre production has been captured in Dolby Atmos. This brings a unique and extraordinary experience to the cinema, making it feel as if you are sitting in the theatre itself and watching the original performance of the play.”

Richard Eyre’s five-star, multi award-winning revival production of Ghosts sold out at the Almeida Theatre before transferring to the West End’s Trafalgar Studios. It will be screened in more than 250 cinemas across the UK and Ireland for one night only, June 26.

“The presentation of Ghosts in Dolby Atmos is a great step forward for event cinema and a sign that the industry is embracing the innovation this sector has to offer. Congratulations to CinemaLive and Digital Theatre as well as Dolby for a great achievement, one that audiences will most definitely appreciate,” said Melissa Keeping, chairperson of the Event Cinema Association.

Ghosts will be screened June 26 at Vue Cramlington, Vue Glasgow Fort, and Showcase Leeds and on July 10 at Olympic Barnes London.

Multi award-winning theatre, film and television actor Lesley Manville can currently be seen in Disney’s Maleficent and later in the year in Mike Leigh’s Mr Turner. Her numerous theatre credits include work at the National Theatre, Old Vic, Royal Court and for the Royal Shakespeare Company. She has regularly collaborated with Mike Leigh in films including Another Year, All or Nothing, Topsy-Turvy, Secrets and Lies and High Hopes.

Richard Eyre was director of the National Theatre 1988-1997. Most recently he directed Stephen Ward The Musical (Aldwych Theatre); Quartermaine’s Terms (Wyndham’s Theatre) and The Pajama Game for Chichester Festival Theatre (now at the Shaftesbury Theatre). Eyre also directed the critically acclaimed Henry IV Parts 1 and 2 for the BBC’s 2012 Shakespeare Season. His film credits include Iris, Stage Beauty, Notes on a Scandal and The Other Man.