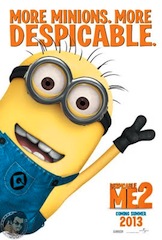 Cinepolis and Contenido Alternativo announced today that Universal Pictures and Illumination Entertainment's Despicable Me 2 was delivered through the Satellite Network to 281 of the chain's theatres simultaneously. Thanks to the digitalization process that Cinepolis successfully concluded a few weeks ago to 100 percent of their theatres, making it the first exhibitor in the Latin American industry to have all of their screens with this technology, the movie Despicable Me 2, distributed by Universal Pictures, is the first one delivered via satellite to 281 Cinepolis theatres in Mexico.

After several years providing live content to Cinepolis, Contenido Alternativo has successfully completed the first electronic delivery of Despicable Me 2 in a digital format, to be released today nationwide.

“It took us only a few hours to deliver the movie as opposed to three to four days that it regularly takes to replicate and deliver hard drives to all of those cinemas" said Juan Manuel Borbolla, CEO of Contenido Alternativo, "From now on, our logistics will be much more effective and faster, so we are more than happy to let everyone know that we open for business".

"Universal is thrilled that Despicable Me 2 is now the first movie ever to be delivered via satellite in Mexico", said Mauricio Duran, Universal Pictures International's senior vice president marketing and distribution, Latin America. "Supporting Contenido Alternativo in its digital transition emphasizes our commitment to further new technologies in the industry and we look forward to continuing this relationship with future releases."

Gabriel Morales Becker, Cinepolis Sub Director of Administration and Digital Strategy declared:  "Digitalization in the exhibition industry is a worldwide transformation. In Mexico and Latin America, Cinepolis took the leadership to digitalize all of its screens offering its customers the benefits of this new technology. Today this effort is combined by the first electronic delivery of the movie Despicable Me 2."