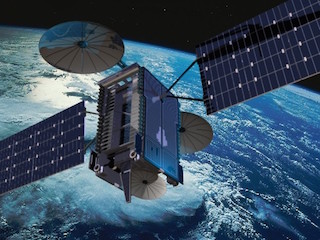 Two years ago this month, a new organization – the Digital Cinema Distribution Coalition – launched what was then billed as “the industry’s first-ever digital theatrical delivery service.” With the launch, DCDC began servicing its founding companies by transporting feature films and other content via satellite across the United States. That DCDC was not the first to do this was beside the point. DCDC had the backing and the blessing of those founding members: Warner Bros. Entertainment, Universal Pictures, Regal Entertainment Group, Cinemark Theatres and AMC Theatres. Today, DCDC has a virtual lock on its market, but questions remain regarding its long-range potential.

On the positive side, the number of content providers that have joined DCDC has continued to grow and now stands at 24. Several additional distributors have become DCDC customers, including The Weinstein Company, STX Entertainment, Arts Alliance Distribution, By Experience, Gathr Films, Group 1200 Media, Magnolia Pictures, Pure Flix, SpectiCast and Shorts International.

In a recent press release, CEO Randy Blotky said, “The DCDC Network has effectively converted traditional movie theatres into true community entertainment centers that have successfully expanded the shared content experience for consumers to all forms of content, including movies, operas, ballets, eSports, live-store and live- live events, from anywhere in the world.”

Just since May, that press release continued, “Fifteen additional exhibitors with approximately 200 locations and more than 1,800 screens have signed up, bringing the total number of theatre circuits under contract with DCDC to 73 across 2,300 theatre locations and 28,000 screens. As of August, more than 1,700 of those theatre locations already have DCDC’s proprietary equipment installed, successfully delivering digital content to nearly 22,000 screens. To date, DCDC has made more than 360,000 successful deliveries over its network for its content provider customers.”

Among the issues on the not-so-positive side: it’s unclear if DCDC can expand beyond the U.S. and, even if that’s possible, if the service can keep up with ongoing changes in cinema technology.

Regarding expansion, one knowledgeable industry source, who asked not to be named here, told me he remains skeptical. “What’s interesting is the lack of portability of this model to other countries,” my source said. “It requires a large territory to create efficiencies. Last year, the government bank in Brazil was interested in backing a similar venture there, but studios were not convinced that the model would work there. Europe has similar problems. Even if a single satellite can broadcast across borders, governments get in the way of the broadcast. DCDC works in the U.S. because state governments don’t get in the way, creating a large territory for satellite delivery.” 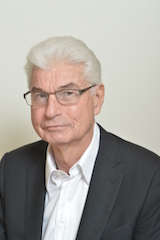 The technology challenge is bigger still.  “DCDC can’t handle all movie delivery through satellite. It’s too slow. Technology works against DCDC in this way,” my source said. “As high dynamic range and wider color gamuts and high frame rates emerge in movies, file sizes will grow. But satellite bandwidth won’t grow. So it will take longer and longer to download the movie by satellite as newer formats emerge. This is where I expect more competition to DCDC:  hard drives grow in capacity for a given cost simply due to the IT market, without investment by studios and exhibitors. So hard drive delivery could become more cost effective in five years time, unless satellites are replaced, which is very costly.”

Recently, I conducted an interview via email with Blotky. He was very forthcoming on most topics, not so much on others. For example, he was reluctant to discuss any details about the financial success of DCDC or about costs. That’s understandable; most companies don’t share those details with the media. He was less forthcoming regarding my question about how well DCDC services smaller, independent exhibitors. He said that DCDC has many theatres in its network that have fewer than eight screens. When I asked for the names of some of those exhibitors I was told by a DCDC spokesman that they would get back to me. To date, no one has.

With that as a backdrop, here is my conversation with Randy Blotky, CEO of the Digital Cinema Distribution Coalition.

Digital Cinema Report: There have been many press releases about alternative content on the DCDC platform.  What specific successes have you had?

Randy Blotky: The list is growing rapidly. We’ve delivered or are scheduled to deliver:

Multiple pre-recorded Fathom events including a One Direction concert 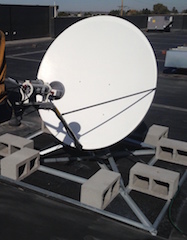 DCR: Are you competing with the Fathom network since Fathom has thus far chosen to stick to their legacy platform?

RB: To clarify, DCDC is not a content distributor but rather a content transporter. In regard to Fathom, we are not competitors. In fact, DCDC has delivered several pre-recorded events for Fathom and we are continuing to discuss additional future opportunities

DCR: The original business plan had DCDC operating as a utility and paying back founding members as the network grew. Has this happened?

RB: The plan is to repay the founding members and then start redistributing what would be considered post-tax profits as rebates to our customers. For the time being, the partners want to use all of our operating income to continue to expand the network; the rebates to customers will take place after our founding members are reimbursed for their capital investments, and will most likely begin to occur in the next few years.

DCR: Is DCDC saving the industry money over hard-drive duplication and delivery that has dropped to the sub-$100 range?  (Factoring in the installation costs of the system.)

RB: Without commenting on the assumptions present in your question: Yes.

DCR: What are the installation costs of the system?

DCR: What is the minimum theatre size for DCDC to install its satellite system?

RB: It is not the theatre size per se that determines the economic analysis we look at to make this determination. The most important metric for us is how many first run and other films a theatre plays per year, and how much it will cost to equip, install and maintain the theatre site.

DCR: What about the smaller exhibitors?

RB: The same holds true for them. Ultimately, however, we will consider everybody for membership on the network. It is just a matter of when, not whether. We will prioritize new sites based on individual financial assessment.

DCR: Have you had any success with sub-eight screen theatres?

RB: Yes, we have many such theatre locations in our network. 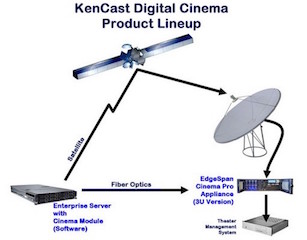 DCR: What is the minimum delivery size (number of screens or locations) for a movie or alternative content delivered over the network?

RB: There are no minimum delivery sizes in terms of the number of screens or locations. There is a minimum price for transmitting a movie by satellite over the network.

DCR: How does the model work for live versus DCP?

RB: Pre-recorded DCPs are based on the number of deliveries, versus a per transmission hour charge for a live-live or a live-store program.

Pre-recorded content is stored on our catch server at each theatre location and it is not visible to that site until it is booked to play that specific content. Once the theatre is booked, that content becomes visible and the theatre’s theatre management system/server and/or library management system/server makes a copy of the content from DCDC’s catch server. That is when delivery of such content is complete and is what triggers DCDC being paid.

For live streaming (for both live-live and live-store programming), DCDC is simply paid a per-transmission hour fee irrespective of the number of theatre sites or the number of screens that such programming plays at/on. DCDC picks up the contribution feeds of such programming at our Gilbert, Arizona uplink facility where it is converted (as necessary) to theatre-ready content prior to being transmitted on our full-time transponder on the AMC15 satellite to all the theatre locations within the DCDC Network. At each location, the live streaming content is played by our catch server through a decoder and then by the screen server at that location.

DCR: What are the cost differences?

RB: We don’t publically discuss the specifics regarding costs or pricing.

DCR: Anything you would care to add?

RB: Having launched in October 2013, we are on track to reach 32,000 screens in more than 3,000 theatre locations in 2018, up from the 28,000 screens across 2,300 theatre locations that currently have agreements with us. As of the end of September, more than 1,800 theatres have DCDC’s proprietary equipment installed. DCDC has successfully delivered digital content to nearly 22,000 screens. To date, DCDC has made more than 360,000 successful deliveries over its network for its content provider customers, which continues to see significant growth.

The combined increase of exhibitor and content providers comes as our specially created North American network, comprising next-generation satellite and terrestrial distribution technologies, succeeds in transforming theatres into nodes on a network that can be programmed for various audiences. The network we created has effectively converted traditional movie theatres into true community entertainment centers that have successfully expanded the shared content experience for consumers to all forms of content, including movies, operas, ballets, eSports, live-store and live- live events, from anywhere in the world.

Contributing to the influx of new distributors has been our focus on offering a new high-quality, live-streaming technology solution we unveiled this year at CinemaCon. Working in conjunction with our primary service provider, Deluxe-EchoStar, the new system is designed to allow the DCDC KenCast catch server to stream live content into an unlimited number of auditoriums from two simultaneous real-time 1080p-HD event feeds, as well as two additional pre-recorded events. This allows exhibitors the flexibility to book up to four events simultaneously to an unlimited number of auditoriums.