David Evans Debuts as DP on Silkies of Madagascar 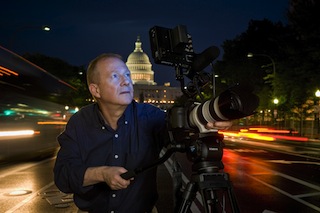 “I began looking around for an appropriate tripod system,” he says. “Then I discovered Vinten’s Vision blue. It is super compact when folded up and rock-solid steady when in use. After looking around, it seemed the absolute best choice for me. It balances easily and the movement is as smooth as anyone could possibly want.”

The Vision blue is designed to make precise camera panning and tilting movements easy for videographers. The user-friendly controls allow customization of camera pan and tilt settings to suit the convenience of the operator. Plus, the system offers a bubble level with LED light and LF drag system. Evans finds this set up perfect for his shooting package, which consists of a Canon 5D Mark II with a Marshall 7-inch monitor. He also carries Litepanels MicroPros and a Rode VideoMic shotgun microphone.

Evan’s first test of the Vision blue was shooting close-up B-roll. Then he was off to Kuala Lumpur where he personally introduced the Silkies’ trailer at a conference whose attendees and speakers included Melinda Gates, Chelsea Clinton and Malaysian Prime Minister Najib Razak. While there, he got some great footage using the Vision blue in the field. he adds, “Next up I’ll be shooting throughout Africa and Asia.”

The trailer for Silkies of Madagascar has been making the festival rounds and has won several awards. It can be seen on Vimeo at https://vimeo.com/44541008. The Lancet (the world’s preeminent medical journal) has mentioned the film in an article about the power of filmmaking as a tool for global health advocacy. The 30-minute film will premiere this month to coincide with the 10th anniversary of the International Folk Art Market in Santa Fe, New Mexico.

Now that Evans has made the transition to DP, his focus has shifted away from broadcast/cable and towards projects that tell stories of the underserved around the world and the challenges they face accessing the global economy, health care, and basic justice. “Some plum storytelling opportunities only have budgets for one-man crews,” he says. “I want those opportunities. The Vision blue is going to help me make that happen.”