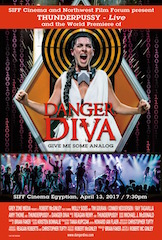 Seattle’s SIFF Cinema and the Northwest Film Forum will present the world premiere of Danger Diva, a Robert McGinley film, with a live rock concert from Thunderpussy on April 13. Danger Diva is a cyberpunk musical thriller that McGinley wrote, directed and produced.

McGinley’s other credits include the films Jimmy Zip and Shredder Orpheus.

Danger Diva was filmed entirely in Seattle with a local cast and crew. The star of the film is the indomitable Molly Sides, lead singer of the all-girl rock/pop band, Thunderpussy. Supporting Sides in leading roles are Seattle theater/film standouts Tim Gouran, Ray Tagavilla, Amy Thone and Conner Neddersen. After the screening, Thunderpussy will mount the stage and unleash a set of their fiery brand of rock.

In Danger Diva, audiences are taken on a journey into the near future with hard rock singer Devi Danger as she is coerced into becoming an electronically enhanced new-music diva. Her singing voice is used to control and energize the brains of indoctrinated employees (also known as Brain Cattle) that are being used as external processors for the advancement of corporate high tech clients. Operating in a digital sweatshop, these Brain Cattle process binary algorithms that serve as a chorus for Devi Danger.

McGinley’s influences for the film came mainly from cyberpunk literature and films; in particular, William Gibson’s Neuromancer and the science-fiction classic, Blade Runner. Further inspired by the Ella Fitzgerald Is it live, or is it Memorex commercial, Danger Diva explores the conflict between high tech versus high touch, and what it means to be human in a digitally enhanced bio-tech future.

Music anchors these themes with an eclectic rocking score with songs by Seattle-based rock band Thunderpussy and composer Regan Remy.

McGinley said, “In the midst of this rock ‘n roll saga, the audience will have an opportunity to ponder future technology nightmares like the use of enslaved human brains as external hard drive processors, or employing human offspring as vehicles for life extension.”