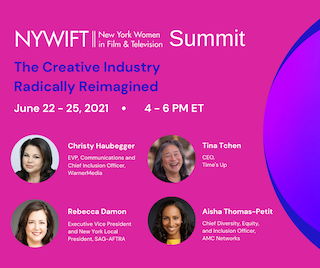 Later this week, as executive director of the professional association New York Women in Film & Television, Cynthia López will oversee the 2021 NYWIFT Summit: The Creative Industry Radically Reimagined. López is an award-winning media strategist, and former Commissioner of the New York City Mayor’s Office of Media and Entertainment, where she implemented strategies to support film and TV production throughout the five boroughs. López is the recipient of many coveted industry awards including: 11 News and Documentary Emmy Awards, a Special Emmy Award for Excellence in Documentary Filmmaking, three Peabody Awards, and two duPont-Columbia Awards. In addition, she received the National Association of Latino Independent Producers Award for Commitment to Corporate Diversity. Prior to working as Commissioner, López was executive vice president and co-executive producer of the award-winning PBS documentary series American Documentary | POV and was involved in the organization’s strategic growth and creative development for 14 years. On January 1, 2019, she became executive director of New York Women in Film and Television. López recently agreed to do a Q&A via email; our conversation started with her legacy as an advocate for women and other minorities.

Digital Cinema Report: You have had an impressive career both as a filmmaker and as an administrator. The through-line throughout your career seems to be a deep concern for independent film and, especially, for women and other minorities. How has that experience informed the decisions you make as executive director of New York Women in Film and Television?

Cynthia López: Since January 2019 as executive director at NYWIFT I have brought my expertise as a creative and media advocate to inform our strategic organizational development, creating new and exciting opportunities to help women of color that were unaware of our work to become familiar, and developed unique organizational partnerships with entities like: The New York Times Women’s Network, 100 Women in Finance, and CUNY-TV, and elevated partnerships with major festivals including Sundance Film Festival, Hamptons Film Festival, and Tribeca Film Festival. In addition, I worked in collaboration with the Directors Guild of America which hosted our Designing Women Awards at their theater in 2019 and have continued to be supportive to our organization. Other industry partnerships and programs include: NYWIFT Goes to the Emmys and NYWIFT Goes to the Oscars – programs that highlight NYWIFT Members that have been nominated for these prestigious awards.

Ensuring that diverse creative women are part of every aspect of the work that we do – including our panels, summits, individual workshops, scholarships, and film fund grants – is paramount. Ensuring that every funding or scholarship opportunity includes language about inclusivity and diversity is the way forward. 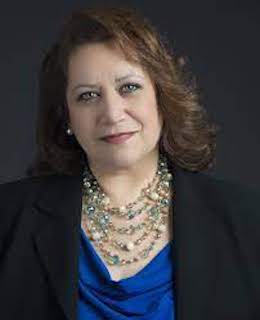 I consider myself a public media advocate, someone that fights to make sure appropriate and diverse images of people of all races, abilities and opinions are represented by the media we produce and consume in this country and around the globe.

Women have not been allowed to take their rightful place in the media making industry. And as such, organizations like NYWIFT are vital to ensure that we advocate for women – inside the media industry as well as those who want to produce independently. NYWIFT advocates for pay equity and to support create opportunities for women to network and hear about best practices for thriving in competitive commercial entities. And we provide skills-based training opportunities for women filmmakers that have private production companies that want to grow their businesses and thrive creatively.

DCR: Who or what led to your first break in this business?

CL: I had many god mothers along the way that guided me in both commercial (television production) and indie filmmaking with a public media mandate.

One of my first jobs in the media industry was working for Harris Publications. I was looking for part time work and a close friend suggested I be interviewed for an assistant advertising position and that grew into a position working for Woman Magazine as an editorial assistant. I worked part time during college at the publishing house. Later after I graduated college one of my first mainstream media jobs was being a television series producer for Television Espanola, Canal + in collaboration with the BBC. The job really was a location and talent scout for a 13-part television series.

DCR: You took over as executive director of NYWIFT a little over two years ago, replacing Terry Lawler who had been with the organization since 1997.  What changes, if any, have you implemented?

CL: Advocacy has always been at the heart of NYWIFT’s mission, but especially in the last few years. The NYWIFT Board conducted a retreat and developed a three-year plan which included:

Diversifying NYWIFT leadership; our Board of Directors is approximately 50 percent diverse. Reviewing programming and other opportunities to engage diverse communities/membership. 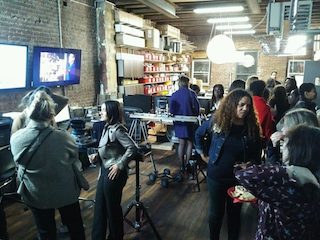 During the pandemic of 2020 we witnessed the unprecedented Black Lives Matter Movement thrive, violence against the AAPI community increase, visibility for our LGBTQIA+ friends, and the #MeToo movement all become vital contributing components of our community building campaigns. It seemed more pressing than ever to address the need for intersectional inclusion both behind and in front of the camera. Film and TV – the stories we tell – shape our culture and our society. What better place to start to address inequality than within the media we consume and produce?

During my first year in 2019 we established the NYWIFT Creative Workforce Initiative, which addresses the key issues of diversity and inclusion, safe working environments, and pay equity. We have presented two annual Summits – with the third coming up this month – with major support provided by the Ford Foundation. Our goal is to address these core issues through a series of keynotes, panels, and screenings with industry and indie thought leaders. And it’s not just talk – participants come away with actionable solutions and guidance for workplace improvement. After each Summit we publish a journal of the findings – NYWIFT’s first-ever publication in its more than 40-year history!

And during the pandemic we established a new series, NYWIFT Talks, which has industry leaders in conversation addressing the key issues affecting our industry and innovative solutions for forward movement.

We continue to build partnerships through programming at key industry events like The Hamptons International Film Festival and The Sundance Film Festival. We were thrilled to establish our first NYWIFT-branded event during Sundance 2020 – of course we didn’t know it then, but it was one of our last big in-person programs pre-COVID. 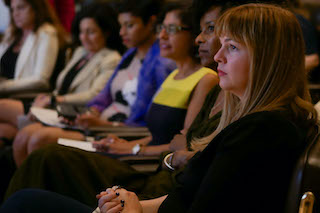 These are just a few examples. We’re always moving and shaking at NYWIFT.

DCR: What do you see as your organization’s key missions?

CL: Since its inception in 1977, NYWIFT has brought together a diverse community of women and allies who want to build a better industry together. We create a safe communal space for creatives and executives to have important, and often tough, conversations about the workplace. And we strongly believe in lifting women up by providing them with professional development programming, ample networking opportunities, and inspiration through special events like our annual NYWIFT Muse Awards.

As an organization we are constantly growing and adapting to best address rapidly changing industry. And of course, for the last year, a large portion of that has been devoted to addressing COVID-19.

DCR: What impact has the pandemic had on NYWIFT?

CL: We are nimble, and within days of New York City shutting down our team shifted to an entirely virtual format. We actually increased our programming by about 70 percent, made sure the vast majority of it was free and open to the public since so many were suffering, and through our virtual programs we served an audience of more than 11,000 people from around the world. It’s been a wonderful opportunity to engage with a wider audience.

DCR: In your view, what are some of the areas in the industry where women and minorities have made the most progress?

CL: I believe it is television series as creators. Television or serialized content is more nuanced, with diverse characters, and cinematically stunning. Diversity is one of the best business strategies I use. It provides new creatives with opportunities, increases diverse and loyal audiences, and it increases financial investments. Diverse women and people of color have made incredible inroads as writers of television programs and serialized content. Programs like those at Starz (La Vida and Power) and AMC (The Walking Dead) and others have grown audiences, increased advertising revenue for their networks and have provided unique portrayal of women and the community.

DCR: What are some of the biggest remaining challenges for women and minorities?

CL: It can still be hard just to get your foot in the door. It’s one reason I’m so excited to welcome our partners from WarnerMedia and AMC Networks to this year’s NYWIFT Summit. Both have instituted company-wide diversity and inclusion initiatives, at both the creative and the executive level, that not only “check the box” but actually open the doors to nurture emerging talent. It’s so important to have women and people of color not only in mentorship programs but also in positions of power, to be the decision-makers and bring their unique perspective so that our industry actually represents the rich tapestry of the human experience not just one point of view.

As one of the founders of National Association of Latino Independent Producers – we created this organization to ensure that Latinos working in both the indie and commercial world had an organization that would advocate on their behalf.

DCR: Finally, what words of encouragement can you offer for women and minorities who dream of a career in film and television?

CL: Educate, set concrete goals, and never give up.