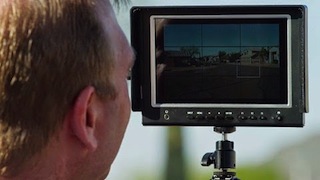 Manios Digital & Film’s MD7 is a lightweight, 7-inch LED 1080p field monitor that combines an economical price – list is $440 – with a feature set comparable to, and in some cases exceeding, monitors costing several times more. Among the first pros to test drive the MD7 was Curt Pair, a Phoenix-based director of photography and principal of Picture This Productions. Pair, whose credits range from news and documentaries to commercials, corporate media and music videos, conducted camera tests with the monitor at an air show in March. Since then, he’s used it on a pair of real-world assignments: a segment for the Golf Channel series In Play with Jimmy Rogers and a commercial for Ford, all with superb results.

Introduced at the National Association of Boadcasters show last April, the device attracted considerable attention from users of DSLRs and other small cameras, and earned a spot in many best of lists from the show.

As a trial run, Pair shot the famous U.S. Air Force Thunderbirds squadron at an air show at Luke Air Force Base in Arizona. His aim was to see how the device performed as a viewfinder and for focus assist when paired with a Canon 5D and similar DSLR cameras, and to test various battery configurations.

Pointing to MD7’s sizs – it’s less than an inch thick and weighs just 12.7 ounces – Pair calls the monitor ideal for DSLR use. “It works exceptionally well with the 5D due to its connection types,” he says, adding that he was also impressed with such built-in features as a safety marker, check field, freeze input, peaking, and a histogram for exposure. “For the price, most people will be surprised by the features,” he says. “They thought of everything.”

For Golf Channel’s In Play with Jimmy Rogers, Pair used MD7 with both Canon 5D and Red Epic cameras while capturing a multi-part feature on transgender golfer Bobbi Lancaster. He shot interior and exterior interviews with host Jimmy Rogers, Lancaster, her family members and other golfers, as well as exteriors of golf tournament play, all in the Phoenix area.

When using a field monitor outdoors, notes Pair, glare and reflection can be a problem. He points out that a foldable sunshade is available for the MD7 to minimize those issues. “When using the sunshade to mask unwanted light, the visibility of the monitor is quite remarkable,” he says. “You can see reflections in the monitor, but I have the same issues with monitors costing five to seven times as much.”

Pair’s Ford shoot involved a Spanish-language commercial featuring actor Cristián de la Fuente, star of such popular series as Valiant Loveand Quiero Amarte. The production included a lot of fast action with de la Fuente jumping in and out of cars and MD7 provided simple and flexible means for ad agency and client personnel to monitor the shoot. “We needed something light and fast,” Pair recalls. “Clients were able to watch over my shoulder. It worked great.”

That kind of versatility coupled with MD7’s rich feature set, sharp picture quality and light profile make it a welcome addition to his toolkit. “It’s quite an amazing value,” he concludes. “Typically the feature set on this monitor would be reserved for monitors costing at least twice as much, if not several times as much money. If you’re in the market for a new monitor or need an additional, lightweight monitor, check out the Manios Digital MD7.”