If you’re one of the 23 million who have seen the Top 10 iTunes WTF (https://www.youtube.com/watch?v=KO_3Qgib6RQ) video of Missy Elliot featuring Pharrell Williams, you likely recognize the signature moves and grooves director Dave Meyers lent to the comeback queen’s rap performance. This year Scott Cunningham, his director of photography and long-time producer, is adding his own visual influence to Elliot’s storied career.

Cunningham first used Schneider Optics’ Clear True-Streak filters on another Meyers-directed project, the successful Ciara video, Dance Like We’re Making Lov. For that he chose the 1mm filter, which gave him a subtle romantic candlelit glow. “The beauty of these filters is that you can control them to suit your needs. They can be played as a classic anamorphic flare or be used to create a much more exaggerated effect,” he explains. “I liked them so much that I have carried a set ever since. True-Streaks are part of my bag of tricks.” 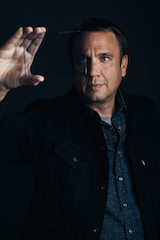 He proved the filter’s potential after Missy Elliot made her surprise appearance at the Super Bowl. Deciding to recreate that magic in a kick-ass video, Meyers and team chose the Los Angeles River by the iconic downtown Sixth Street bridge. But when rain caught the production by surprise, they quickly improvised a new location.

“We had Missy, six dancers, and three hover-boards all choreographed for the riverbed that was no longer very dry,” he laughs. They had minutes to move the set to a nearby street.  “As we rushed to set up in the rain, I was inspired by the wet street and the LED lights on the dancer’s costumes to take advantage of a nice opportunity. I put the True-Streak 3mm filter on the Arri Amira and took the risk to let the scene play dark. I wanted the flares to highlight each dancer and intensify their movements. Everybody loved the effect and it was only the first shot of the night.”

Considering that today’s music videos are mainly seen by the millions on small screens, Cunningham says, “When you shoot and know a lot of people are going to view the work on a three-inch iPhone, you can approach the project differently. You can be bold and dramatic with your choices, less subtle than you might on a 40-foot screen. I use tools like the True-Streak to help resonate in this smaller format.”

With her new album underway, Cunningham and Meyers are already brainstorming on their next video. “The music video allows an artist, director, and DP to push themselves creatively. I strive to photograph each set-up in a unique way with its own visual signature, which helps makes the video satisfying to watch. Throwing in a bit of spice like the Schneider True-Streak filters help achieve that goal,” Cunningham says.