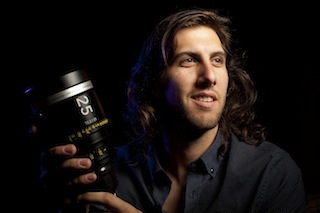 When cinematographer Colt Seman and colleagues, Dylan Trussell and David Dinetz of Culprit Creative were charged with creating the music video for Korn’s Spike in My Veins, they decided to go beyond the expected. For the edgy video, they deployed the new Bolt Cinebot high speed robotic camera arm, the 1000fps, high-definition Phantom Miro camera; and Schneider-Kreuznach Cine-Xenar III prime lenses.

Seman’s reason for using the technique was simple: “It creates never before seen imagery that defines a new style of high-speed cinematography.”

The video premiered on the front page of RollingStone.com, garnering millions of views and giving the video instant success. “The music video was incredibly labor-intensive and a blast to make,” says Seman. “Getting featured on Rolling Stone was the type of success we wanted, especially as Korn heads out on its upcoming tour.”

Seman gives high marks to the Cine-Xenar III lenses employed with the Bolt Cinebot and the Phantom Miro combination. “What’s nice about the Cine-Xenars is that when you’re shooting at such high speeds, you need a lens that will deliver an accurate, sharp image,” he notes. “For some applications, cinematographers prefer other lenses that are a little softer and have a buttery look, but when you’re dealing with high speed, you want sharp and crisp; you want to see the details of the high speed, and the Schneiders went above and beyond the call of duty.”

He chose the 35mm and 50mm focal lengths and used aperture settings of T/4 down to T/2. “Sometimes we went down to a T/2, because we needed the extra light and basically wanted that ‘shallow depth-of-field’ look with our high speed,” he says. “At T/2 it has a more cinematic, high-speed look, versus that ‘everything-in-focus’ look.”

Seman points to the value of the Cine-Xenars’ precise and rugged construction, especially when being used with the high-speed robotic camera arm that creates tremendous G-forces on the camera package. “If you use the Bolt arm with lenses without Schneider’s quality build, you’ll see shaking because of the G-forces on the lens,” he notes. “There was no evidence of that with the Schneider primes on this project.”

As for the form factor of the Cine-Xenars, Seman explains, “We had a lot of room to put our wireless follow focus on, considering the tight space on the robotic arm. The Cine-Xenars were just right — not too small where the gears would get clustered — just a perfect size.”

Culprit Creative was named to Forbes’ 2014 list of The 30 Under 30 Driving the Radical Transformation of Marketing and Advertising.

The Korn music video can be viewed at: http://www.rollingstone.com/music/videos/korn-fight-media-manipulation-w...