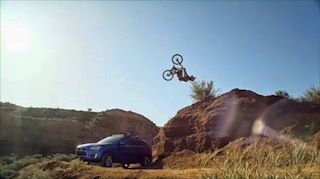 Crosland captured spectacular shots of champion riders Cam McCaul and Cam Zink performing stunts in rugged back country outside Virgin, Utah. The results include a 30-second national television spot, Get There, and an online content series that includes a white-knuckle ride along and behind-the-scenes material. The television spot features the Mitsubishi Motors North America theme line “Find Your Own Lane” and includes a shot of one of the riders executing a 360 back flip off a ridge and over the Outlander Sport. “We traded a lot of ideas with the agency’s team and ended up creating a unique adventure in Virgin, Utah,” Crosland says.

Crosland is part of the filmmaking collective Sherpas Cinema the creative force behind Into the Mind and All.I.Can, two of the most acclaimed extreme skiing films of all time.  He deployed some of the same groundbreaking production techniques to capture action imagery for the Mitsubishi commercial. The shoot featured soaring aerials, dynamic rider POVs and gorgeous automotive cinematography.

“We are always thinking on a macro and micro level simultaneously,” Crosland says. “We want to get those banger shots jumping over cars but also look for the textures and talent performance to really bring the humanity and the feel.”

“As a collective, we are always working together, exchanging ideas and nudging each other to get better,” he adds.

Sherpas Cinema’s Dave Mossop acted as aerial director and he noted that new technology is changing the aerial DP world. “The spectacular canyon setting was a perfect venue to attempt some next-level shot ideas,” Mossop observed.  “Cam's flip over the car lasted only a split second, so it was an awesome timing challenge to snipe that moment from the three most optimal aerial positions.  The whole team came together and did such an amazing job.  Blowing grass foregrounds with Zion's magnificent sand-spine backdrops were amazing. Boo-yaka-sha!”

Crosland says that he was inspired by the daring and athleticism of McCaul and Zink, and their ability to perform under challenging conditions. “It’s hard to jump in a windy place where your wheels turn into sails,” he says. “Those guys did an incredible job with aggressive riding on brutal terrain. They delivered the jumps and the stunts, as well as charismatic talent performance.”