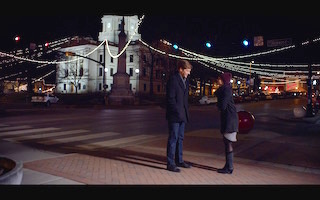 Writer/director Paul Shoulberg’s vision for his feature The Good Catholic was to have it not look like a typical romantic comedy, but to take on a more naturalistic look and feel. To help achieve that vision, cinematographer Justin Montgomery, who worked with Shoulberg on a previous short project, selected Cooke’s S4/i prime lenses to take advantage of their warmth and bokeh, giving images a creamy quality with sharpness.

“The Cooke S4/i primes are really beautiful, with a slight warm quality,” said Montgomery. “With Paul wanting as much naturalism as possible, using the S4i primes gave us an organic look in our prime location inside a church, where we pushed light through stained glass, used candles and tungsten lighting. That really drove home the realism of the story.”

The Good Catholic is the story of Daniel, a small town priest who loves his job more than anything, but then meets Jane in this fresh take on the boy meets girl story. It’s won the Panavision Spirit Award for Independent Cinema/Best Feature Film at the Santa Barbara International Film Festival; Best Screenwriting at the Milano International Film Festival, where it was also nominated for Best Cinematography, Best Director, and Best Editing; and the Festival Award for Best Film at the Grove Film Festival in New Jersey, where John C. McGinley and Wrenn Schmidt were nominated for Best Actor and Best Actress, respectively.

“As a producer and cinematographer, the Cooke S4/i primes perfectly met both of my needs — from a rental cost as a producer, and as an artistic tool as a cinematographer,” said Graham Ehlers Sheldon, producer and second unit cinematographer. “Making independent film is hard and you sometimes have to make sacrifices when it comes to your kit on a project like this to balance the budget, but having access to phenomenal Cooke glass really made the images we achieved in this film pop. No sacrifices necessary.”

While Montgomery had used Cooke lenses before, in his previous project with Shoulberg, he nevertheless tested the S4/i primes to make sure that he wouldn’t get any vignetting while shooting at 5K with the Red Dragon.

“While the Cooke S4/i primes are rated not to vignette at resolutions up to 6K, we tested them anyway,” said Montgomery. “With the Red Dragon at 5K, we had no issues and knew we would be good with all the focal lengths we used.”

Those focal lengths for the S4/i primes included 18, 25, 35, 50, 75, and 100mm, all used in the harsh winter conditions of Bloomington, IN. “Even with the cold weather, the lenses all performed great, and we never had a delay, especially while moving from exteriors to interiors,” said Montgomery.

“It’s hard to describe, but the Cooke look is just something that I know I’m going to get and everyone is going to love, even shooting wide open, it’s just there,” said Montgomery. “You know what it looks like, it’s just almost impossible to describe — you have to see it.”

One scene where the Cooke S4/i primes stood out was a night exterior where the actors are walking from the dark sidewalk onto the porch of the house. “The Cookes helped to bring out the details in the shadows and background, which is fantastic, especially when shooting 2-2.8 for most of the film,” said Montgomery.

“For those who haven’t used Cooke lenses, do your own testing to see if the quality works for your project,” said Montgomery. “You can’t go wrong with the Cooke look, as long as it works for the quality you’re after and the story.”

The Good Catholic opens September 8, 2017 in the U.S., in select theaters and on iTunes. It stars Zachary Spicer and Wrenn Schmidt, with Danny Glover and John C. McGinley. The Good Catholic is produced by Pigasus Pictures and distributed in the U.S. by Broad Green Pictures.

The trailer can be viewed at www.thegoodcatholicmovie.com.