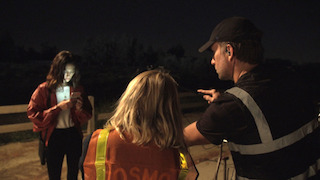 The rustle of a newspaper, the sounds of the bus engine far away, the steps of the stalker in the pitch-black night. Writer/director Roxanne Benjamin used only the soundscape to make her short film Final Stop and to create an astonishingly realistic and thrilling cinematic atmosphere. Benjamin made Final Stop for Sennheiser to showcase some of the company’s latest audio technology. It was recorded in immersive 3D audio, using just a Smartphone and recording most of the audio with Sennheiser’s Ambeo Smart Headset, which was developed with A/D conversion specialist Apogee.

In Final Stop, the protagonist played by Australian actress Phoebe Tonkin is on her way home from the city on a night bus.

She soon notices a man in the back of the bus whose face is covered by a hood. The more people get off the bus, the closer he gets to her. Fearfully, she finally gets off the bus in an abandoned part of the city where she hopes to shake off her pursuer. But as soon as she leaves the bus she realizes she did not get off alone. 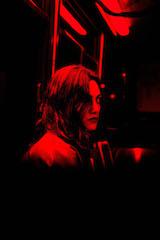 According to Benjamin, the incredibly realistic 3D sound recorded by the headset makes horror and shocking moments appear more intense than ever before. One of the passengers rustles his newspaper in the front of the bus, a couple argues to the protagonist’s right while behind her, she senses someone watching her. The sound experiences give the viewer the feeling of sitting in her seat.

“Since we structured the short around the use of 3D audio, I kept the camera largely behind Phoebe, so that audiences really felt that fear of being followed,” Benjamin said. “This was the element that struck me the most about the Ambeo Smart Headset when I was first testing it out – just how effective it could be in enhancing a narrative horror setting. The 3D element really brings you a whole lot closer to the action and feeling like you’re right there with Phoebe as she’s experiencing this fear. It’d be fascinating to see it being used for a full thriller or horror feature."

Benjamin is rooted in the thriller and horror genre. As a producer, screenwriter and director, shehas broken new ground and established her own understanding of horror with episodic films such as Southbound, XX and the V/H/S series. She is currently in post on the survival thriller Body at Brighton Rock, which she wrote and directed.

Leading actress Phoebe Tonkin also has genre experience: In 2012 she appeared in the horror movie Bait 3D and joined the cast of The Vampire Diaries. The young Australian became known to a broad audience through her role in the series H2O: Just Add Water, in which she played one of the main characters, Cleo. For this role, Tonkin was nominated in the Best Lead Actress in Television Drama category at the prestigious Australian Film Institute Awards in 2008.