Coventry Celebrates the Return of the East Winds Film Festival 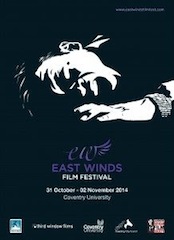 The only major film festival of East Asian cinema outside of London and the first of its kind in the Midlands returns to Coventry October 31 through November 2 for its fourth edition. East Winds will be introducing audiences to a broad spectrum of popular film from one of the most influential industries in the world.

"We have worked hard to put together a very exciting and varied program, with a focus on high school horror in all its many forms," said Spencer Murphy, festival director.

In partnership with Coventry University and Third Window Films, East Winds will be celebrating East Asian film and culture through a selection of 11 International, European and UK Premieres from Taiwan, Hong Kong, Thailand and Japan, ranging from star-studded action blockbusters and chilling horrors to touching dramas and delightful comedies.

The Opening Gala will feature the latest work from one of the rising stars of the Taiwan film industry, Chang Jung-chi's eagerly anticipated thriller Partners in Crime. Marking the director's second feature, the film brings a fresh perspective on the alienation and bullying phenomenon in Taiwan.

Playing for the first time in Europe will be David Lam's crime thriller Z Storm. Starring Louis Koo, one of the stalwarts of the Hong Kong film scene, the production revolves around the edgy investigation of a Bernie Madoff-style Ponzi scheme.

From Thai master of suspense Sophon Sakdaphisit, best known for co-writing Shutter and Alone, comes the International Festival Premiere of The Swimmers, a tense horror focusing on a love triangle experiencing supernatural encounters.

Closing the festival is the European Premiere of Thailand's official entry for the Best Foreign Language Film at the 87th Academy Awards, Nithiwat Tharatorn's The Teacher's Diary. The romantic comedy follows a moving story of two rural teachers who find each other through unexpected circumstances.

The full schedule will be announced in early October, with tickets going on sale shortly afterwards.