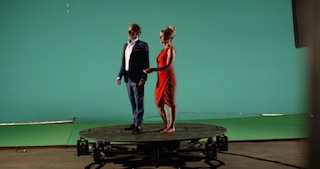 Frankie allowed the team at Ingenuity Engine to review and discuss work-in-progress with the director, producers and the ad agency, even though they were in four separate locations. Synchronized, interactive video review enabled an efficient creative decision-making process.

Hired by M&C Saatchi in London to work with noted director Joseph Kahn, Ingenuity Engine was tasked with creating a series of three ads for Virgin Holidays. The campaign is aimed at British couples and families and features the humorous tagline Unleash your Mojo. One spot follows a very ordinary couple who land in Florida and are magically transformed into just the sort of adventurous, fun-loving people they weren’t being at home. The couple is shown on a romantic cruise ship and at a swanky resort. Another spot shows a family of four, “the Harlows,” looking drab in muted colors and searching for a parking spot. Again, the moment they arrive in Florida, the palette shifts to bright colors, the music picks up and the “Harlow Globetrotters” are suddenly all smiles.

“They’re fun commercials to watch,” said David Lebensfeld, VFX supervisor and creative director at Ingenuity Engine (IE). “As you might imagine, our creative team had a great time making them happen.” 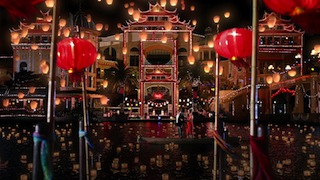 It was director Kahn who suggested that the agency hire IE for on-set creative and postproduction work. Ingenuity Engine had worked with Kahn many times before, on videos for Britney Spears and Lady Gaga as well as TVCs for Old Navy, Jell-O, Fox Sports and many others.

“We have a long history of working with Joseph,” said Lebensfeld, who travelled from the IE office in Hollywood to South Africa for the one-week shoot. “There’s an unspoken trust and knowledge about what we collectively want to accomplish on set. What we bring to the table is good execution.”

Lebensfeld worked closely with Kahn in preproduction meetings and on set in South Africa before heading to London to shoot FX plates and start editorial.

“My job was to help Joseph create the commercial he wanted to,” Lebensfeld said. Case in point: a challenging and innovative transition from the couple luxuriating in a hot tub to a new scene where the husband is swinging a sword and turning a tuna into sushi. “I know what Joseph wants the shots to look like. Understanding his ideas allowed us to find a way to execute that transition that we knew would work for him.”

In another sequence, the storyboard for the Unleash your Mojo spot shows a man’s face morphing into a lion’s face as seen through a glass of wine. “We could tell it wouldn’t work as drawn,” explained Lebensfeld. “Our conversation instantly became an idea session back and forth. We figured out together how to make it work, and had fun doing it.”

For the family spot, as the mother steps out of her car and her dingy London black-and-white life, her heavy clothes become a brilliant white one-piece swimsuit as she strides confidently into bright sunshine. Initially, there was a problem with the way her clothes fell away. This was solved by reimagining the transition, a quick solution that ended up being more elegant than originally planned. In short: carefully tweaking the ideas on the storyboard led to a strong and artistically compelling execution on the screen. 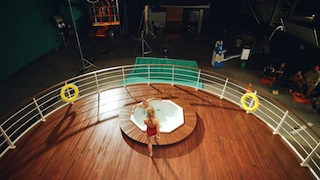 Ingenuity Engine completed all of the post-production work at its studio in Hollywood. The commercials required complicated transitions between shots with overlapping VFX, clean up and set extensions. It was there, also, that the team began the video editing process, first using cineSync – Cospective’s review tool for feature film work – then switching to Frankie. IE completed the spots in less than six weeks and throughout that period held regular review sessions with their internal creative team, the director up the street in Los Angeles and the M&C Saatchi producers in London.

“We used Frankie each morning for our interactive reviews of the previous day’s work,” said Oliver Taylor, VFX producer at Ingenuity Engine. “By using the synced review option in Frankie while we talked to our client on the phone we were able to get much more out of those conversations. Using a tool like Frankie is the only way we can do this.”

Every morning Taylor would upload the current video for review, send a link to the director, who was in L.A., the producer in London and the M&C Saatchi producers, also in London, and begin the review. That means that six people, in four places were reviewing the same footage simultaneously. As they watched the footage, frame by frame, any one of them could hit play, pause, make notes or even sketch their ideas right onto the video – all in sync with everyone in the review.

“It worked like a charm,” Taylor said. “We’re long-time users of cineSync. With cineSync, our clients had to install the software. Then we’d send them the files, which they would have to download. It took time and a lot of handholding to get it right. With Frankie it’s so much easier. We just send a link and begin. This is the first job we used Frankie on and it made review so straightforward and so much faster.”

The whole cruise ship sequence was shot in studio in Cape Town, with set extensions to create the sea, the wake of the ship and the sky. Yet, even more than the visuals, it was the process that Lebensfeld is most proud of. “Initially, the ad agency was hesitant to work with a company that wasn’t local,” he said. “They had found communicating between London and L.A. difficult in the past.” 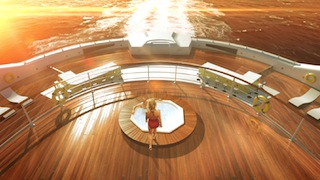 The producers at M&C Saatchi were very hands-on and particular about what they wanted. For example, there are scenes in one of the Virgin Holidays ads with Chinese lanterns hanging on strings. Usually, IE would have released balloons, shot them and used a Particle system to create the lanterns. The agency wanted to hand-place actual lanterns. Communicating how to do this at a distance over the phone would not be easy and the producers were wary of doing it that way.

“But once they saw how the work could be communicated so easily, clearly and quickly with Frankie, they were blown away,” Lebensfeld said.

“Our company is structured to work on shorter projects, where the turnover is quicker than for feature film work,” Taylor said. “It’s quicker for us to get work, quicker for us to complete it. Ingenuity Engine is built to adapt and to do that quickly. It’s one of the reasons we love Frankie. We’re using it again now for a major TV network promo. It’s one of the most important tools we have. There is no equivalent in the consumer world. Everyone knows you can look at the same image at the same time, but not video. Our clients are amazed by Frankie the first time they see it. They think it’s magic. It’s crucial for the work we do.”

Lebensfeld concurs. “Now I prefer doing a call on Frankie instead of having clients come into the office. When our clients are actively involved in the review process, drawing right on the screen and commenting about frames, they are way more engaged. They pay attention to what we’re doing and the process is more collaborative.”

Frankie plans start at $249 USD per month, which includes up to five concurrent projects, unlimited users, unlimited reviews, 10 GB of video storage and complete cross-platform compatibility. Monthly subscriptions can be cancelled at any time. Free seven-day trials are available at www.cospective.com/frankie.