Cooke is the S.M.A.R.T. Choice 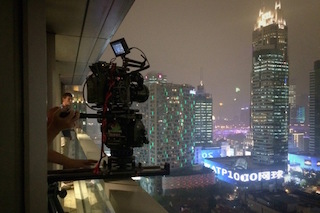 While language barriers posed some initial challenges for the Chinese and international crew and cast of S.M.A.R.T. Chase, the upcoming action thriller produced by Bliss Media and starring Orlando Bloom, the choice of camera and lenses did not. The film was directed by Charles Martin and shot by director of photography Philipp Blaubach using Cooke Anamorphic/i lenses on Arri Alexa digital cameras to capture the modern architecture and dazzling night skyline of Shanghai.

“I use Cooke S4/i lenses a lot, but this was the first time I had used the Anamorphic/i set,” says Blaubach. “I was keen to shoot anamorphically as I love the size of the canvas and the opportunity to play with the frame, especially when you have an ensemble piece with multiple characters. You can use foreground, mid-ground, background, it’s so interesting – you can have long non-dialogue scenes and let the action play within the frame so you don’t need to cut or pan that much.”

Martin, who was directing his first feature film, was excited about the opportunity to shoot anamorphically but also had some concerns. Blaubach explains, “We thought at first that it would be more expensive or that it would make a difference for VFX – for example, if you use vintage lenses with lovely imperfections, romantic fall offs round the edges and distortion, they can be a problem for the VFX people. We decided to see what was available in China and find a set that had that character, the whole reason for using anamorphic - but not to the point of causing problems.”

Blaubach and Martin obtained a set of Cooke Anamorphic/i lenses to test, and found they gave all the required character without any of the issues. “Some anamorphic lenses have a strong barrel distortion but Cooke must have done something to correct this because the lines are much straighter, which was very good for shooting in the city where you have horizontal lines of skyscrapers,” he says. “We did look at some other, newer anamorphic lenses but they were so clean and sharp and perfectly corrected that they had lost all the artifacts that people like, such as the squashed bokeh – you wonder why people would use anamorphic lenses without those characteristics. That said, we didn’t want the archetypal ‘Asian action movie’ blue flare, and the coating on the Cookes eliminated flare nicely."

Blaubach also knew that there was a lot of night work involved where he would need to shoot wide open, which isn’t easy with all anamorphic lenses. “Some of them go a bit mushy, but the Cookes were very sharp,” he says. “The night shoots featured the exciting ambient lighting of Shanghai from shop windows, street lamps and neon advertising, with lots of different colour temperatures, and even wide open we could really see the detail.” Blaubach also used Angenieux Optimo zooms which “cut very well with the Cookes, it was a good combination for second unit work.”

This was Blaubach’s first experience of working in China. “I was warned beforehand that a lot of the Chinese crew wouldn’t speak or understand English, and communication was certainly a challenge – everything had to go through a translator, from emails to production meetings, and instructions on the day for the lighting and camera crews. Thankfully I was able to bring my gaffer from the UK so that I could have a direct contact for my creative and logistical conversations, and then later he had to communicated those on to our Chinese gaffer and then on down the line,” he says. “I have to say though that the whole experience was a big adventure – the crew were lovely and hard working people, my translator was great, and the sets and scenery in Shanghai were incredible. I have very fond memories of this shoot.”

S.M.A.R.T. Chase, starring Orlando Bloom as a washed-up private security agent who has to escort a valuable Chinese antique out of Shanghai, is a Bliss Media production. It is scheduled to premiere in China on approximately 40,000 screens September 30.