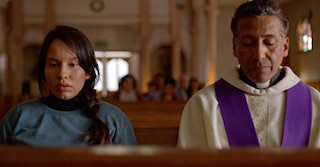 Still Devout is a new AFI Thesis film written and directed by Melissa Perez, which follows the story of a young woman who embarks on a heart-wrenching journey to help find answers and healing for her brother’s mental illness. To help optimize the film’s production workflow in preparation for post-production, Perez met with Burbank-based AlphaDogs for a personalized post consultation before the film was shot.

Said Perez, “Upon meeting the team, I knew AlphaDogs would handle our post-production with utmost attention and care. The team prepared us for production and saved us valuable time and money by giving us great advice and direction. They completely understood my vision for the story and were very easy to communicate with. I would highly recommend them based on their professionalism, knowledge and excellent attitudes toward indie filmmakers.”

AlphaDogs audio engineer Curtis Fritsch was in charge of audio for the film. Problem areas that Perez didn’t think could be fixed included scenes shot during a windstorm that produced static over the dialogue and mixing scenes that were shot in two locations with different microphones. With the help of Cedars DNS, Fritsch’s keen ear and extensive experience in working with indie films, final delivery of audio was nothing short of super clear dialogue.

Perez said, “The sound issues we had were not only solved, but improved dramatically.”

Remaining true to AlphaDogs collaborative approach in working with clients, Fritsch and Perez also worked together on the style of the sound for the film based on a list Perez had prepared ahead of time.

“When clients have a great plan for sound, it almost always is way beyond what myself and the client expected,” said Fritsch. “I prefer to work with clients in helping achieve their vision, rather than the project just being dropped off to be fixed.”

Perez added, “It was really fun working with Curtis on the mixing stage. After several passes, we went deep into the emotions that sounds can create. After a couple of changes, you could actually feel what the character was feeling. It was such a fascinating experience.”

The stigma of mental illness keeps most people from talking about it, leaving families desperate for help and understanding.

Perez based the story on personal experiences within her own family. She explained, “My family would take these unplanned bizarre road trips that were always for the sole purpose of fixing something that had gone wrong. I always felt this pressure to help my family, even if it was something I didn’t exactly agree with.”

Perez hopes that after audiences watch Still Devout, they will walk away asking themselves how one can accept their family for who they are, even if you don’t agree with their beliefs. Still Devout will premiere at the Central American Film Festival this November.