The Colors of American Dreams in China 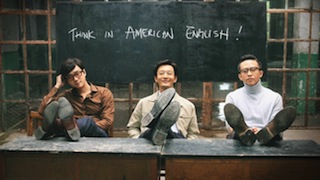 American Dreams in China, director Peter Chan's first digital cinema effort, was shot on Arri Alexa and recorded on Codex. Chan’s strong affection for the filmic look determined how the film would be graded and finished in post. Colorist Antonio Zhang of the Chinese facility Post Production Office Group supervised the entire process.

The film is based on a true story about three friends who graduated from Peking University and went on to build a successful English language school in China called New Dreams. The school helps to make the dreams of Chinese teenagers come true. The film covers a time-span of more than 30 years, which involved various scenes shifting back and forth between the present and past. The PO Group team addressed this challenge by setting the looks for each time period. The first part covers the time the three friends study in Peking University; the second focuses on them building the language school, followed by their success in the stock market.

Antonio said, “I chose the Arri Log C as the default debayer and applied a FPE (Film Print Emulation) 3D LUT on top of all of the shots to mimic the filmic look that Peter Chan was after. Also, my aim was to preserve the highlighted elements and enhance them further by revealing even greater details where possible.”

Antonio added, “For the first look, we tried to make the colors more vivid to depict university life and the passion for the characters' start-up days. We used an old 1980s Chinese magazine as a reference and made the grade look really old but colorful. The second look had to be really cool, professional and business-like, and due to the fact the characters had a lot of arguments, the cool tone helps to portray that antagonistic atmosphere effectively.”

PO Group purchased the SGO Mistika 4K color grading and finishing system, a Mistika Assist Station and an SGO SAN to support their stereo 3D and high-end color grading services for film and commercials. Founded in 2003 by entrepreneur and actor, Nicholas Tse, PO Group is the largest post-production house in Hong Kong, grosses more than one billion Hong Kong dollars annually, and has branches in Shanghai, Hong Kong and Beijing.

While the 4K Mistika system forms PO Group in Beijing's principal system, the Mistika assistant station is a fully capable file-based Mistika system in its own right. It enables the studio to increase efficiency and throughput, by having an assistant to the main colorist prepare projects in advance, or to work alongside to ensure the smooth running of even the most complex projects. The SGO SAN not only allows the two Mistika's to share project assets, but also allows the media sharing to extend to all other technical facilities at PO. Projects of various formats occupy the facility's pipeline from 2K to 4K, and S3D to higher frame rates. With the SGO Mistika and SGO SAN, PO Group have built a very efficient pipeline.

“Mistika was the perfect grading and finishing tool for this movie,” Antonio said, “It has a strong editing function, and we were also able to achieve both the conform and grading in Mistika. This really created a smooth and effective workflow, as I could grade from the original Arri Raw Raw file and easily change the debayer for individual shots, which was so convenient. Flexibility is really important to us here at PO Group, especially as we face a lot of different digital camera formats, however Mistika's compatibility with various camera formats is a great advantage and provides an excellent high-end service for us throughout the entire post production process.”

K.C. Yeung, general manager of PO Group in Beijing said, “Mistika forms the core of our DI suites and its speed and performance is phenomenal. The comprehensive toolset allows for tasks to be completed in one suite which provides an interactive and immediate environment in real-time for client-facing work.”

CEO of SGO, Miguel Angel Doncel said, “PO Group is one of China's major post production companies and SGO is proud to be associated with them and continues to support the company in meeting the growing and complex demands that feature film productions involve. PO Group have raised the bar for what clients should expect in terms of quality, speed and efficiency.”

Produced and directed by Chan, the Mandarin-language film brought in $87.6 million at the box office.