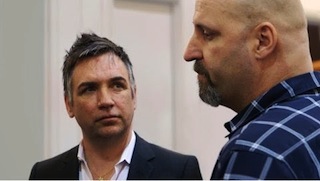 The documentary centers on the story of Matthew Boger who at age 13 was thrown out of his home for being gay. While living on the streets of Hollywood, he was attacked, beaten and left for dead by neo-Nazi skinheads. Decades later, Boger had a chance encounter with one if his attackers, Tim Zaal, and that, improbably, led to forgiveness and reconciliation. The two men became friends and collaborators and are touring the country to share their incredible story.

Cohen met Boger and Zaal while working on a long-form documentary for the nonprofit Fetzer Institute. “The chain of events, what these guys went through, and their journey toward forgiveness struck me immediately,” Cohen says. “You hear a lot of forgiveness stories, but this one is pretty remarkable.”

Cohen, whose background includes work as a film and television producer, assembled a top-notch crew that included cinematographer Svetlana Cvetko (Inside Job) and editor Tom Christopher (Independent Lens, American Masters).  The documentary was primarily shot with a Canon C-300 camera in C-log, which provided a versatile and relatively low-cost means of producing studio-grade imagery.

At Colorflow, Pritchett took it through a digital intermediate-style mastering process that is common for studio features but rare for an independently produced documentary. Using an Autodesk Lustre grading system, Pritchett not only balanced light and color to give the film a consistent look suitable for theatrical display, he also used color to affect the tone and atmosphere. That is most clearly evident in a sequence recreating the attack on Bolger, which occurred in the early ‘80s.

“It’s a night sequence and we stylized and desaturated it quite a bit,” Pritchett recalls. “We pushed a lot of browns and yellows into it to give it the feel of the time period and keep it dark and moody. There is a lot of fluorescent lighting in those scenes, but it’s not Vegas-style lighting. It’s faded and grungy…ominous.”

Color can be a subtle but powerful storytelling tool, says Pritchett, but the cost of sophisticated post-production processing has kept it beyond the reach of most documentarians and other independent filmmakers—at least until now. Software advances have helped to improve the speed and lower the cost of digital intermediate color grading.

More importantly, Colorflow has developed a business model specifically geared toward creatively minded independents. “More filmmakers are beginning to realize that they can use color to tell stories,” says Pritchett. “It’s good to see people in the documentary world experimenting with these tools.”

Cohen agrees. “Colorflow is fulfilling a need in the Bay Area film community,” he says. “They thought of everything in building the studio in terms of services and amenities. There simply isn’t another post house that can do what they do.”