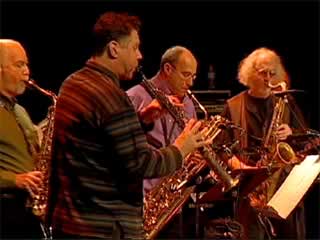 Electric Ascension was shot at the 2012 Guelph Jazz Festival in Ontario, Canada. Rova members Bruce Acklely, Larry Ochs, Jon Raskin and Steve Adams were joined onstage by eight other jazz heavyweights for a rare performance of the group’s critically acclaimed, electrified arrangement of Coltrane’s seminal work.  John Rogers and Jim Mayer of the Berkeley production company, Ideas In Motion) and Associate Producer, Starr Sutherland (A Typical Project), worked with a crew from Toronto based SIM Digital to record the performance with 5 cameras.

Colorflow’s task was to give the film a theatrical quality finish that captured the spontaneous magic of the performance. Pritchett completed an initial grading pass where he set an overall tone and look for the film, and adjusted for differences in the various cameras. He then made a second pass where his focus was on finer adjustments. Among other things, he spent a lot of time applying isolated color treatments to individual musicians to make them stand out in varying lighting conditions.

Such detailed work is common for Hollywood blockbusters, but rare for independent films, which often have severe time and budget constraints. Colorflow is helping to change that, Pritchett says, by leveraging the latest post-production technology and workflow innovations that control costs while delivering studio-grade results.

“We have the ability to apply even very complicated grades in real time,” he says, “and it’s apparent in the results. By the end of the second day, we had a concert film that looks phenomenal.”