The Colonie Posts Taste The Excitement for McDonalds 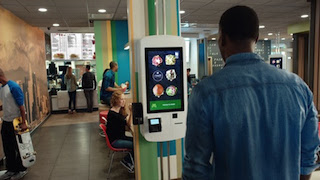 The Colonie showcased the full range of its editorial, visual effects and post-production services in a McDonald’s spot that creates a fun, carnival ride mood to generate excitement about its new touch-screen Kiosk ordering system, introduced in select locations across the country. Cut by editor and partner, Bob Ackerman, “Taste The Excitement,” a :30 spot via Burrell Communications/Chicago, delivers a highly stylized, slightly surreal McDonald’s environment where customers can skip the counter and order a customized meal from a kiosks with a tablet-like screen offering a wide range of options.

The :30 commercial opens with a young man entering McDonald’s and approaching a kiosk with a  Create Your Taste touch-screen. As he presses the start button the kiosk opens and a chair appears, taking him on an amusement park-like ride behind-the-scenes of McD, which reveals employees preparing orders with fresh ingredients from displays stocked with everything from artisan breads to a variety of sauces, toppings, fresh vegetables and cheeses. Excited by the abundance of choices, he makes his selections and the journey ends as his chair returns to the dining area where his customized meal is served to him at his table. The spot ends with the tag Build Your Perfect Burger, and the familiar McDonalds Logo – I’m lovin’ it. 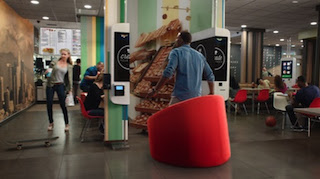 The spot relied heavily upon visual effects integrated with live action to tell its story. The complex FX scene tapped the full range of The Colonie’s collaborative team of multi-disciplined designers’ and visual effects artists’ talents and creative skills. Because of the tight turn around time Tom Dernulc, The Colonie’s senior VFX artist, got involved at the inception of the project to collaborate with the agency.

“By sending a VFX supervisor to the shoot we’re able to work closely with the client during the production phase, and bring a level of technical and creative expertise that ensured that the post process went smoothly,” said Dernulc. “We never let the nuts and bolts of creating a shot get in the way of the creative demands that always arise the day of a shoot.  We’re there to help spark ideas and help everyone tell the story in the most visually compelling and engaging way.”

Working closely with Burrell Communications’ creative director, Rebecca Williams, and Original Films director, Tony Petrossian, Dernulc helped maximize the efficiency of the shoot and made sure that before it wrapped they had every element needed to create the complex sequence of visual effects the spot required. Sharon Kimbrough, Burrell Communications’ producer, made sure that all of the necessary elements and approvals were received as expeditiously as possible, and in the end the entire job came off without a hitch - and on schedule. 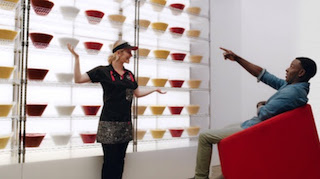 Once the footage was received, Ackerman immediately got to work on a rough cut. Even before sending the first cut to the client for approval, The Colonie’s FX department jumped into high gear and began constructing the opening and the closing of the spot. The spot was edited on The Colonie’s Media Composer and visual effects were created on Flame Premium.

“If we can get the broad strokes settled early, it gives us more time to focus on the small VFX details that aren’t necessarily scheduled into the postproduction timetable – and elevate the visual intrigue of the FX, as well as the ‘wow’ factor of the whole spot,” added Ackerman.

“This commercial had a lot of moving parts.  We were able to get involved in the pre-production phases, provide on-site visual effects supervision during the shoot, edit, create the visual FX and finish,” said executive producer, Mary Caddy. “The job was a great opportunity to showcase The Colonie’s full service capabilities.”