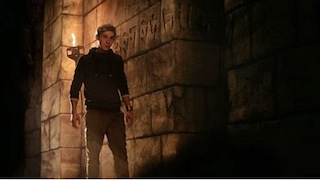 The Colonie’s Keith Kristinat has edited a spot launching the new Nintendo game The Legend of Zelda: A Link Between Worlds for Nintendo 3Ds. Conceived by Leo Burnett and produced by The Mill, Legend of You highlights the immersive quality of the game as a young man mimics the appearance and experiences of its main character, Link.

“To become a legend you must be willing to risk everything,” intones the voice-over, as the young man enters a torch-lit dungeon hallway where he must survive deadly obstacles, including a disappearing floor and flaming arrows, to reach his goal: securing the Master Sword. As Link would, the boy uses his powers to transform into a hieroglyph and merge into the stone walls. He then makes his way to a garden where he grasps his prize.  The live action gives way to a sequence of animated game footage.

Kristinat’s crisp editing accentuates the action sequence. “I owe a lot to this creative team and have a great history with them,” he said. “They allowed me to join them in putting out a spot for an iconic game. I enjoy working on a brand as loved as Nintendo—especially as it involves a product, Zelda, that I personally enjoy.”

The spot’s numerous visual effects elements, which were produced by The Mill, made it a fun and challenging project. “It was great collaborating with the team from The Mill,” Kristinat said. “They did great work on this spot.”

Kristinat joined Chicago’s The Colonie in September. Along with Nintendo, he has worked on accounts such as Shout, Dasani, Coca-Cola and Kellogg’s.

Title: Legend of You