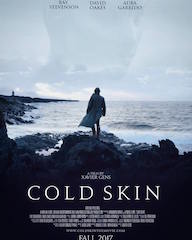 Director Xavier Gens’ horror film Cold Skin premiered today in ÉclairColor HDR at Cines Verdi in Barcelona. The film is being distributed by Diamond Film España. The screening at Cines Verdi was a sneak preview that followed an ÉclairColor high dynamic range technology presentation and a cocktail reception. Cines Verdi, a nine-screen complex, is the first cinema in Spain to incorporate ÉclairColor. Éclair’s exhibitor services company CinemaNext/Proyecson installed the system.

Cold Skin was adapted from the Sánchez Piñol book, which won the Critical Eye Prize for Spanish Narrative in 2003. Piñol’s book has been translated into 37 languages.

The cast includes Ray Stevenson (Divergent), David Oakes (The Borgia) and Aura Garrido (Stockholm, The Time Ministry), who each spent more than eight hours daily in the makeup chair, in one of the most spectacular characterization exercises in Spanish cinema. Cold Skin will be released across Spain on October 20.

On an island lost in the middle of the ocean, two men defend themselves night after night from the siege of strange sea creatures. Under extreme tension, without understanding the reasons for the attack, they will have to rethink how to confront the unknown. The captivity and the incessant struggle for life drag them to a journey to the center of their entrails, where lucidity and alienation, rejection and desire, cruelty and love intermingle, towards the unknown.

ÉclairColor adapts to all cinemas, from art houses to the largest multiplexes. According to a recent audience survey by L’Observatoire de la Satisfaction, the vast majority of people can see the difference when watching a movie in ÉclairColor. In the survey, audience members spontaneously mentioned the beauty of the images, stating they are of superior quality, more colorful and brighter in comparison with a standard image. The full study is available in English at http://eepurl.com/c4AXKH.