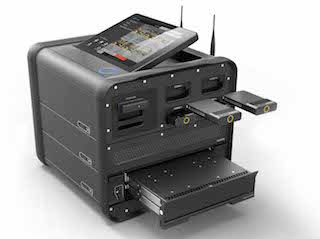 Codex has once again collaborated with Arri to develop the recording and workflow system for Arri’s next evolution of the Alexa camera – the Alexa SXT.

The companies’ engineering teams worked closely together to create high-performance, integrated recording, plus on-set and near-set data management systems, which combine to deliver a streamlined camera-to-post workflow for the Alexa SXT range of cameras.

“Arri is continuing to raise the bar and expand the Alexa family but they are also protecting their existing customers by offering an upgrade path for Alexa owners,” said Marc Dando, managing director of Codex. “It’s great to work with Arri, to set new performance capabilities with our new media, and to show that the Arri - Codex partnership is continuing to expand the creative and technical choices available to cinematographers.”

“Like Arri, Codex believes in delivering excellent image quality and reliable products to the cinematographic community,” said Franz Kraus, managing director of Arri. “Having already successfully implemented the in-camera capture technology for the Arri Alexa XT, and a solid workflow with Vault, Codex was a natural choice as the workflow developer for Alexa SXT.”