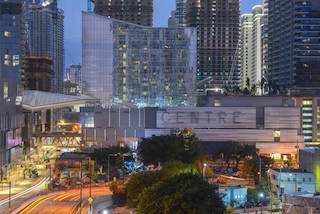 Barco and CMX, a subsidiary of Cinemex, have partnered to equip the new CMX Theater at the newly opened, billion dollar plus Brickell City Centre in Miami, Florida with Barco’s Smart Laser cinema projectors. When it opens in April, the cinema will deliver the region’s best movie presentation quality while operating at a significantly lower cost than traditional xenon-powered theaters.

Barco and Cinemex have a longstanding relationship resulting from the digital cinema conversion of 1,800 screens for the exhibitor’s theaters in Mexico in 2013. Since then, Barco has grown its market share of the Latin America cinema market to 80 percent, while Cinemex is ranked the sixth largest cinema chain in the world.

With more than 300 multiplexes in Mexico, Cinemex has just begun its expansion into the United States. The CMX Theater at Brickell will be the first site, to be followed by other locations all over the USA. The Brickell cinema features 10 auditoriums in a nearly 36,000 square foot multiplex.

“We are excited to chart our international expansion course with Barco at our side,” said Luis Castelazo, director of CMX. “They have been an excellent, highly reliable cinema partner with the very best technology at the lowest TCO, enabling us to offer a high quality movie experience to our customers. Our Brickell City Centre cinema is one of the world’s all-laser theaters, providing an exceptional and unique entertainment experience.”

“We are honored to support CMX’s U.S. growth plans and applaud the company’s strong commitment to delighting its customers with the best moviegoing experience,” said Ivan Cannau, vice president Latin America for Barco. “In addition to elevating movie presentation quality, our Smart Laser projectors will help CMX to significantly reduce operating expenses and risk, as a flexible and future-proof solution.”