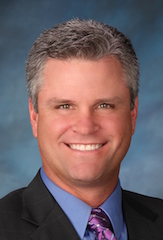 Dolby Laboratories today introduced the Dolby Integrated Media Server IMS3000, which combines Dolby audio and image processing in one unit. According to the company, when coupled with the Dolby Multichannel Amplifier and SLS Express Series, it offers a complete, integrated solution from 5.1 to Dolby Atmos. In advance of CinemaCon 2017, I spoke with Michael Archer, Dolby’s vice president of worldwide cinema sales, to get a closer look.

Digital Cinema Report: What benefits does the IMS3000 bring to exhibitors beyond what the competition offers?

Michael Archer: The Dolby IMS3000 increases purchasing power since there is no need to buy and power multiple units. Dolby IMS3000 offers an imaging server and audio processor in one, saving money and valuable space in the projection booth.

The IMS3000 enables Dolby Atmos now, or later, without having to purchase the CP850 Dolby Atmos processor. It decodes all Dolby cinema and broadcast audio formats. Exhibitors can start with Dolby Audio 5.1 or 7.1. And when they are ready, exhibitors can purchase a license and immerse patrons deeper into the moviegoing experience by playing back movies mixed in Dolby Atmos.

DCR: You’ve announced that the IMS3000 has a simplified design that makes “setup and operation more convenient and cost-effective.” Please elaborate on that.

DCR: You’ve also announced the Dolby Multichannel Amplifier and the SLS Express Series of speakers. Is there an integration benefit to implementing these along with the IMS3000?

Dolby has been collaborating with dealers, exhibitors, and the industry at large to bring the most efficient, cost-effective, flexible solutions to theaters around the world. Our IMS3000 combines Dolby audio and image processing in one unit. When coupled with our Dolby Multichannel Amplifier and SLS Express Series, together, they offer an enhanced feature set that cannot be realized when used independently or mixed with other manufacturer’s products.

An integrated solution affords Dolby a wider pallet to bring innovation throughout the entire audio B-Chain and imaging server products. Innovations that will exceed any of those designed into a single product. 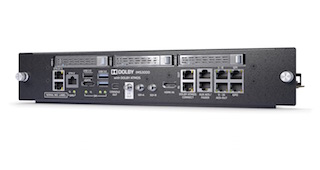 DCR: If exhibitors do want to get each of these components separately, what are the benefits of the Dolby Multichannel Amplifier and the SLS Express Series?

The power supply is designed to allow the system to operate from a 120VAC to 240 VAC 20Amp service without blowing the AC mains circuit breaker. The Dolby Multichannel Amplifier automatically detects maximum and net power availability, certain operational and environmental conditions and adjusts channel gains based on power supply conditions, load conditions and/or fault conditions.

We are also offering the latest SLS Audio innovations in loudspeakers and rigging technologies.

The SLS Audio 3-Axis speakers deliver exceptionally clear and powerful sound in a smaller, lighter package that’s easier and quicker to install. Because each spherical speaker can be mounted in the ceiling or wall, and is easily adjusted for pan, tilt, and rotation, installation time and costs are reduced.

The SLS Audio Rapid Rigging System complements new or existing speakers with an innovative rigging design that simplifies installation to reduce labor costs and downtime. The Rapid Rigging System enables theatre installers to more easily install speakers and cabling with existing high-voltage power into the rigging system for deployment into an auditorium.

Conventional theatre installers can insert ceiling speakers and cabling for Dolby Atmos into one end of an aluminum track that is suspended below the ceiling tile grid. They then move the speakers that are connected by trolly to a rotating cable inside of the track into the auditorium to the designated speaker design location.

We also offer an SLS speaker suite that provides flexibility and can suit diverse needs.

DCR: How are these new tools being priced?

MA: For information on pricing please feel free to contact me at Michael.Archer@dolby.com.

DCR: When will they be available?

MA: The Dolby IMS3000 is currently available and the Dolby Multichannel Amplifier and Rapid Rigging System will be shipping in April 2017.