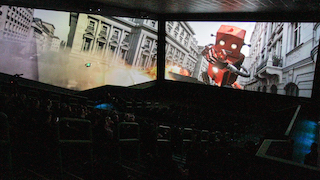 For the first time under its corporate banner CJ CGV will exhibit at CinemaCon 2016, which convenes next week at Caesars Palace in Las Vegas. The company will be in Booth 2003A. In addition to the latest advances and developments with 4DX – the multisensory cinema technology with motion and environmental effects – and ScreenX – the world’s first 270-degree, multi-projection system used within a theatre setting, CJ CGV will be demonstrating its newest addition to the immersive cinema universe: 4DX VR.

This new innovation will provide attendees with a peak at a prototype that may very well be a major influence on the future of the immersive entertainment, marrying virtual reality with the company’s proprietary 4D technology. This is part of an evolution of experience that CGV is continuously developing, aligned with the company’s Cultureplex philosophy of an entertainment hub that offers multifold experiences beyond cinema.

CJ CGV, which is also celebrating its 20th Anniversary, and is the world’s top-five multiplex theatre company, operating 2,589 screens at 332 locations in seven countries, aims to spread the success achieved in Korea to global players. This includes offering its suite of advanced cinema solutions – including CRM (Customer Relation Management), NOC (Network Operation Center), TMS (Theater Management System) and PhotoTicket products – to outside exhibitors for the first time. “This year is the perfect timing for us to join the world’s largest convention of the cinema industry, as CGV has always had plans to grow worldwide, with our big vision to be a leader in the global marketplace,” said Jung Seo, CEO of CJ CGV. “Our partners for premium theatre platforms, 4DX and ScreenX, are seeing tremendous ROI from offering these immersive experiences bring to their customers, and we look forward to continuing to pave the way forward, leading the paradigm shift in the future of cinema.”

Also for the first time, ScreenX has successfully screened feature length films in the format. Six films were made available to excited movie-goers worldwide over the past 12 months, including two in the U.S. – hit Korean film The Himalayas and the Chinese blockbuster adventure Mojin: The Lost Legend. In China, Mojin: The Lost Legend recorded an impressive 82.7 percent average seat occupancy rate on opening weekend.

So far, with a large number of multinational companies recognizing ScreenX’s attentive and immersive experience, more than 100 screen commercials have been created in ScreenX format. Having screened its first full-length feature films successfully in Korea, China, and the U.S., ScreenX is now accelerating its expansion of footprint to the commercial feature film area, by advanced discussions with major studios, film producers, and cinema operators.