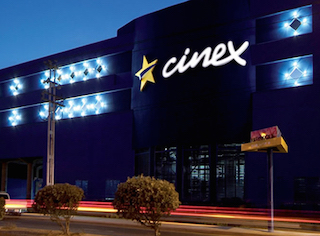 Venezuela’s third-largest movie theatre circuit, Cinex Plaza, is working with Cinema Equipment and Supplies to lead the design and digitalization of its digital deployment across 60 screens nationwide.

Following a lengthy and competitive selection process, Cinex Plaza chose CE+S for its expertise in large-scale implementation of digital technologies and its superior service reliability. The digital cinema conversion for Cinex represents the last one of its kind for any large-scale circuit in Latin America.

“This is the most important and innovative project that Cinex Plaza has undertaken in recent times and we are thrilled to count on the support and collaboration of CE+S once again,” said John Parra, general director at Cinex Plaza. “In today’s rapidly changing digital times, having the right partner by our side is fundamental to keep up with our commitment of excellence and service to our clients, the moviegoers.”

“Our partnership with Cinex Plaza is a testament to CE+S’ positioning as a global leader in digital cinema technologies and our commitment to theater owners to offer best-in-class customer service,” said Guillermo Younger, CEO at CE+S. “Clients around the world have put their trust in us to transform their operations into fully digital theatres and we are proud to collaborate with industry leading partners like Barco and Dolby in these deployments.”

CE+S is providing a 360-degree digital solution built on Barco and Dolby technology that will be pre-staged, assembled and tested at the company’s Miami headquarters before arriving at Cinex’ 60 screens in Venezuela. The full range of cutting edge products include Barco 10S and C model projectors, and Dolby’s latest Integrated Media Server, the IMS2000, as well as the CP750 Digital Cinema Processor.

As part of CE+S’s complete offering in digital cinema solutions, Cinex Theatres will be adding Cielo – CE+S cloud-based remote monitoring and technical support platform - to the full spectrum of services of this implementation. In 2015 Cielo marked a turning point in theater operations, allowing exhibitors to join the Internet of Things era with a technology that allows them to proactively manage their business with unmatched mobility and real-time visibility.