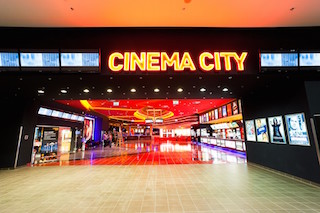 CJ 4DPlex has installed its immersive seating technology in the east European market, available for the first time in Slovakia through a partnership with Cineworld Plc, Europe’s number two multiplex chain. CJ 4DPlex brought the first 4DX theatre to Slovakia on May 11, and the first screening presented was Captain America: Civil War, beginning May 12. Cineworld’s Cinema City is operating three multiplexes and 29 screens in Slovakia and the first 4DX theatre is located in Cinema City Aupark, the biggest residential area with easy access from any point in Bratislava, the central city of Slovakia. Cinema City Aupark, operating 12 screens and 2313 seats, is situated in Aupark Mall, the most famous culture complex shopping center in Slovakia, including lots of restaurants, sports centers, cafes, and shops.

“We are extremely excited to bring this immersive cinematic experience to Slovakia. From the success we’ve seen at the box office in the nearby countries, we have no doubt that this new 4DX theatre will bring more moviegoers to Cinema City Aupark,” said Moshe J. Greidinger, CEO of Cineworld Plc.

In 2012 4DX first became available at Cinema City theatres in other countries in and has since rapidly increased availability throughout Eastern Europe, including in Poland, Hungary, the Czech Republic, Bulgaria and Romania. Based on the remarkable performance in the Cinema City 4DX theaters in other European countries and in Israel, 4DX has broadened its reach to Slovakia, called the ‘Country at the heart of Europe.

“We are very excited to bring 4DX to Slovakia, with a strategic partnership with Cineworld. With this opening, 4DX anticipates to break more ground in Eastern and Western Europe, taking advantage of its geographical location. With the new location in Slovakia, 4DX established a path to broaden its market throughout Europe,” said Byung-hwan Choi, CEO of CJ 4DPlex.

In Europe, 4DX has been operating 31 auditoriums in 12 countries and aims to gradually expand throughout the continent, building solid relationships with European theatre exhibitors. As of May 2016, 4DX reaches 242 auditoriums in 37 countries worldwide, with a goal to add 200 4DX auditoriums in 2016.