Cineplex First in Canada with 4DX 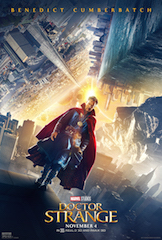 Cineplex Entertainment in partnership with CJ 4DPlex, today announced that Canada’s first 4DX auditorium will open its doors on Friday.  Premiering at Cineplex Cinemas Yonge-Dundas and VIP in Toronto, Ontario, Cineplex’s 4DX auditorium features 80 specially-designed motion seats that are further enhanced by environmental effects like wind, mist, bubbles, snow and scent that work in perfect synchronicity with the action on the big screen. Amplifying the experience from watching a movie to almost being in it, the new auditorium will feature the latest Hollywood new releases, beginning this Friday with the premiere of the highly anticipated film Marvel’s Doctor Strange.

Cineplex’s new 4DX auditorium marks a huge milestone for 4DX, as this will be its 300th screen to open worldwide.  It features more than 20 different effects that have been programmed and optimized by a team of skilled editors to create a one of a kind movie-going adventure.

“We’re passionate about offering our guests new entertainment choices and we’re proud that today we can officially add 4DX to our growing list of premium movie experiences,” said Ellis Jacob, president and CEO, Cineplex Entertainment.  “4DX harnesses the very latest in film exhibition technology from around the world and we are really pleased to be the first to introduce the experience to Canada.”

“We are excited to open our 300th screen globally in Canada and celebrate this milestone in partnership with Cineplex," said Byung-Hwan Choi, CEO, CJ 4DPlex.  “Feedback from audiences in Los Angeles and New York City has been overwhelmingly positive and we're certain that Cineplex Cinemas Yonge-Dundas and VIP will become a prominent entertainment hub within the city."