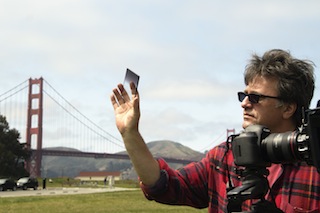 San Francisco is one of the most beautiful cities to shoot – hills, architectural variety, Mother Nature’s beauty – and the inevitable fog. That fog was something that could have hampered photographer Alex Pitt’s recent time-lapse shoot.

The project was a video of artist Mark di Suvero’s eight monumentally scaled sculptures being installed on San Francisco’s Crissy Field, against the backdrop of the Golden Gate Bridge. “It is presented by the San Francisco Museum of Modern Art in partnership with the National Park Service and the Golden Gate National Parks Conservancy,” he explains. “di Suvero’s massive steel sculptures are on exhibit until Spring 2014.”

For more than four weeks, Pitt had a variety of Canon cameras (5D Mark III, 5D Mark II, 5D and two Rebels in waterproof boxes – with solar power), carrying a variety of Canon lenses, and a Kessler Cine Slider capturing the progress of the installation.

When he knew that the San Francisco fog would impact his shots, he added the Schneider Optics 4x4 ND.3 SE to one of the set ups, moving the filter to a different camera when he felt it would help the shots. “The filter simply took the images to another level,” Pitt says. “The heavy San Francisco fog took away any definition while exposing on my subjects. By adding it to a designated camera, I could expose properly on my subject and get definition in the sky, thus creating a far more dynamic shot.”

Independent filmmaker and photographer Pitt specializes in creating commercial time-lapse films for clients such as Buick, Amtrak and Sherwin Williams (where he shot and produced the 1012 restoration of The Hollywood Sign). “The Schneider Optics NDs simply give me more control of an otherwise uncontrollable documentary style of shooting,” he concludes.

The diSuvero project can now be viewed on Pitt’s Vimeo site http://vimeo.com/70135759 or his website http://www.alexpittphotography.com/Timelapse/index.html. It will also be viewable on location, when the museum re-opens.