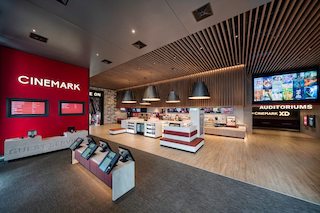 The Cinemark Missouri City and XD Theatre has opened in the Fort Bend Town Center in southwest Houston. The 14-screen theatre is the first to showcase a reimagined theatre design, and, the company says, it brings the best in exhibition to Houston moviegoers, with immersive, first-class amenities including two XD auditoriums, all Luxury Lounger recliners and a new look and feel that enhances the customer experience from the minute they walk into the theatre, all the way to the end credits.

“We are excited to expand our presence in the greater Houston area with the opening of our brand-new Cinemark Missouri City and XD theatre, bringing Fort Bend County moviegoers an exceptional cinematic experience,” said Jay Jostrand, Cinemark executive vice president of real estate. “This theatre’s highly sought-after amenities, such as fan-favorite Luxury Loungers and expanded concession offerings, along with superior sight and sound technology, including two Cinemark XD auditoriums, will fully immerse the audience and highlight the compelling content on the big screen.”

The new theatre is the first to fully reflect Cinemark’s updated brand, which forges a new look, feel and tone that seeks to entertain and inspire through unforgettable cinematic experiences. The refreshed appearance will be reflected throughout various customer touchpoints in the theatre including interior signage, employee uniforms and food and beverage vessels.

Cinemark Missouri City and XD will also uniquely feature an updated interior layout that was carefully constructed based on extensive psychological research and comes together with the company’s superior sight and sound technology for the ultimate Cinemark experience. To round out the aesthetic of the new location, moviegoers will be welcomed to Cinemark Missouri City and XD by a distinctive exterior mural showcasing iconic local imagery with a pop of Cinemark hand painted by Houston artist David Moldonado. 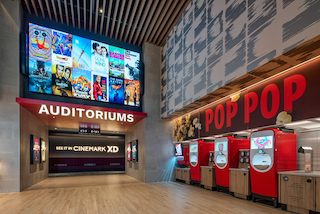 “Houston is one of Cinemark’s strongest markets full of avid moviegoers, so it is only fitting that we introduce our first fully refreshed design at our new theatre in Missouri City,” said Wanda Gierhart Fearing, Cinemark chief marketing and content officer. “We know this re-energized environment will enhance the on-screen action and the entire Cinemark moviegoing experience, reminding guests why the shared, out of home experience is so special. Everything from the ticket kiosks to the concession stand layout, to the colors of the décor has been carefully chosen in order to create a cinematic moment that extends beyond just the story on the screen.”

The Cinemark Missouri City and XD offers the Snacks in a Tap advance ordering feature, allowing guests to skip the concessions line and have their order delivered to their seat.

Several auditoriums have D-Box seats that provide moviegoers a complete immersive dimension to the cinematographic experience by perfectly synchronizing the action on the screen with individual motion control in the seats.

There is also a full bar and lounge area with big screen televisions and expansive seating that serves as the perfect setting to enjoy drinks and cuisine ahead of showtime, while watching the big game or waiting for fellow moviegoers. In addition, the facility has an expansive arcade where moviegoers can step up their game and compete for the high score in cinematic worlds like Tomb Raider and Jurassic Park. A private party room can be booked online for cinematic birthdays and celebrations.